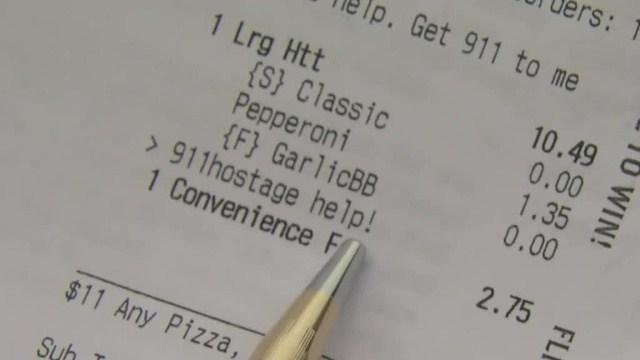 Cheryl Treadway was held hostage by her boyfriend at knife point Monday afternoon, together with her three children, authorities said.

She persuaded him to let her use a cellphone to order a pepperoni pizza online from Pizza Hut, according to authorities.

\"Under the comments section, there was a message asking them to send help and call 911 as they were being held hostage,\" Highlands County Sheriff's Office said in a statement.

'We've never seen that before'

When Treadway's order came in, Pizza Hut employees knew who she was because she is a frequent customer. And her message raised an alarm.

\"We've never seen that before,\" restaurant manager Candy Hamilton told CNN affiliate WFLA. \"I've been here 28 years and never, never seen nothing like that come through.\"

Suspect allegedly armed with a knife

The restaurant chain sent authorities to her house in Highlands County, where Treadway greeted them, carrying a child.

\"She related to deputies that her boyfriend, Ethan Nickerson, was in the home armed with a knife and that her other two children were also in the home with him,\" authorities said.

After escorting her to safety, authorities coaxed Nickerson to come out peacefully. After some resistance, he emerged 20 minutes later, and the other children were removed from the home unharmed.

Report: They were arguing all day

An arrest report stated that the couple had been arguing all day with the suspect allegedly armed with a large knife.

Treadway tried to leave to pick up the children from school, but the suspect would not let her, authorities said. He accompanied her to school instead.

When they returned, she begged him to let her order pizza. As soon as she completed the transaction, he grabbed the phone from her, the affiliate reported.

\"I don't know if I ever would have thought of it. I mean it's just something that she did so naturally,\" Lt. Curtis Ludden told the affiliate. \"The boyfriend never knew about it until he saw us coming around the corner.\"

Nickerson, 26, was charged with aggravated assault with a weapon, battery, false imprisonment and obstructing justice by depriving communication to law enforcement.