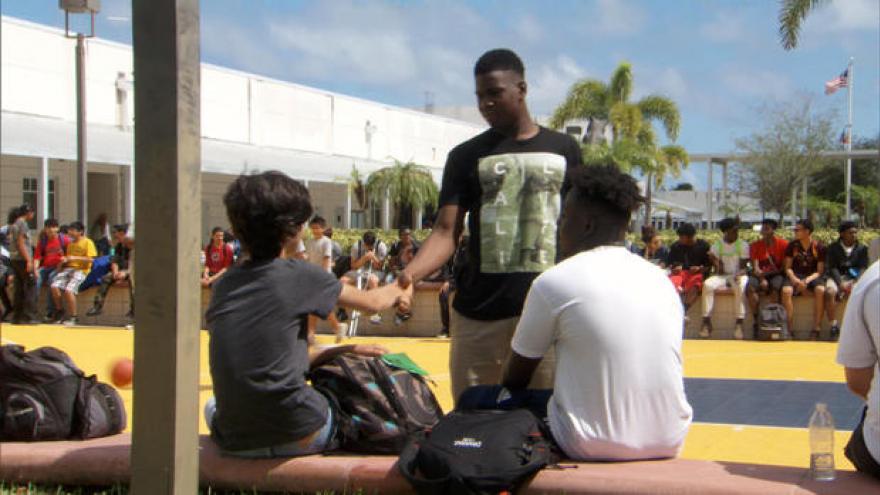 BOCA RATON, Fla. -- When the lunch bell rings at Boca Raton High School in Florida, 3,400 kids spill into the courtyard and split into their social groups.

But not everyone gets included. As we first reported in March, here at Boca High and at schools across the country, someone always sits alone.

"It's not a good feeling, like you're by yourself. And that's something that I don't want anybody to go through," said Denis Estimon.

Denis is a Haitian immigrant. When he came here in first grade, he says he felt isolated -- especially at lunch.

Now he's popular. But he has not forgotten that first-grade feeling.

So with some friends, Denis started a club called "We Dine Together."

Their mission is to go into the courtyard at lunchtime to make sure no one is starving for company.

For new kids especially, the club is a godsend. Since it started last year, hundreds of friendships have formed -- some very unlikely.

Jean Max Meradieu said he met kids he would never "ever" meet on the football team.

Jean actually quit the football team -- gave up all perks that come with it -- just so he could spend more time with this club.

"I don't mind not getting a football scholarship," Jean said. "This is what I really want to do."

Just imagine how different your teenage years would have been, if the coolest kids in school all of a sudden decided you mattered.

"We'll get to know each other better," Jean told one student.

It obviously takes a lot of empathy to devote your lunch period to this. Either that, or firsthand experience.

"I went from coming from a school where I always had friends, to coming to where I had nobody," said club member Allie Sealy.

Allie transferred a few ago. She says with no one to sit next to, lunch can be the most excruciating part of the day.

Since we first told this story, Denis has graduated from high school -- but not from this mission.

He's now travelling the country, opening "We Dine Together" chapters at other schools -- 15 so far, with more than 100 slated for the new year.

And if we're lucky, when he's done showing kids how to make outsiders feel accepted, he can teach the rest of us.