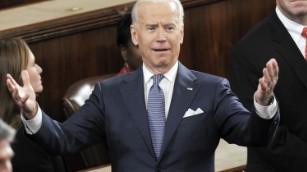 Washington (CNN)Vice President Joe Biden has extended his window for deciding whether to jump into the 2016 presidential campaign, several Democrats say, allowing the contest to play out even longer before he answers one of the biggest questions hanging over the race for the White House.

He is not preparing for the first Democratic debate on October 13 in Las Vegas and is not expected to participate, people close to him say, because he feels no pressure to reach a decision by then. He is likely to reveal his plans in the second half of October.

For more than two months, Biden has been studying the mechanics of what it would take to launch a candidacy. He and his team have been inundated by mounds of research and battle plans, but his original end-of-summer deadline passed without him reaching a conclusion.Campaign managers in key early-voting states have already been identified. Dozens of major donors have stepped forward. Domestic and foreign policy advisers are waiting in the wings.

The speculation about Biden's future has reached a fever pitch, fueled by Democrats searching for an alternative to Hillary Clinton or a backup plan in case her candidacy falters. But with every passing week, many Democrats close to Biden are hardening in their beliefs that he will ultimately decide against challenging Clinton and the rest of the party's field.

He has stopped short of asking his advisers to actually pull the trigger on any of their plans-in-waiting, including setting up the legal structure of a campaign organization and taking steps to qualify for ballots in Michigan, Texas and other states with early deadlines.

"Nothing is actually being done yet," said a senior Democrat who has spoken with Biden, speaking to CNN on condition of anonymity to avoid openly violating the trust of the vice president. "There's far more talk than action."

Biden has said he would only run if he was certain he had a path to victory, several Democrats who have spoken to him say, a hurdle that he increasingly believes is within reach. But he is still unsure whether he and his family are ready for the campaign's emotional toll, these Democrats say, which he has said is the chief benchmark for running.Yet in conversations with nearly two-dozen Democrats close to Biden, the same caveat emerges: He simply hasn't made up his mind. His closest circle of advisers is small enough to fit around his kitchen table and Biden is keeping limited counsel on this decision, which is why several people close to him urge caution against prejudging his final decision.