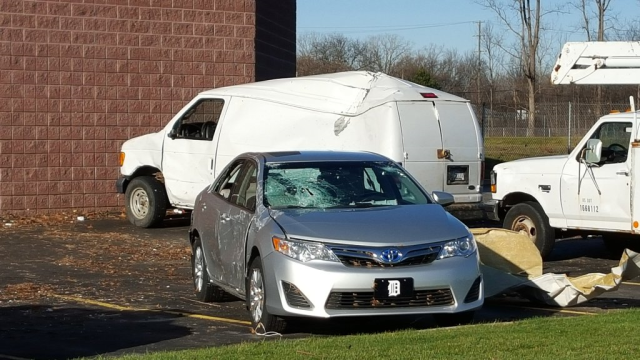 has confirmed that a tornado touched down in Canton Township as gusty storms passed through Michigan Wednesday night.

The tornado is one for the record books

, too — it’s the first confirmed twister to ever touch down in the state of Michigan during the month of December.

Weather officials say the EF-1 tornado hit the area of Lilley and Joy roads just before 7 p.m. Wednesday. The tornado packed wind speeds of around 90 miles per hour and was on the ground for about three minutes, leaving behind a two-mile path of destruction.

The tornado brought down trees and left several vehicles

damaged — some of which slammed down to the ground after being lifted up into the air. Two commercial buildings, an industrial building and several other structures were also damaged. The twister came through with such force that steel doors were blown clear off a building.

of the Civil Air Patrol are cleaning up the damage at Mettetal Airport along Lilley Road, which is currently closed. No planes or hangars were damaged during the storm, according to Mario Accardo the deputy Commander Group 705 Southeast Civil Air Patrol, although debris on the airfield includes roofing material, panels and insulation.

According to the Fujita-Pearson scale, which is used to measure the intensity of tornadoes, an EF-1 twister has wind speeds between 73 and 112 miles per hour.