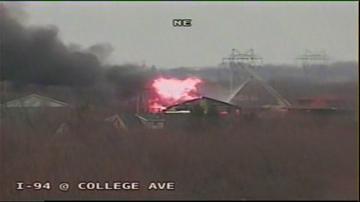 MILWAUKEE -- The Milwaukee Fire Department has responded to a 3-alarm fire at Roz Auto Salvage near General Mitchell International Airport. Firefighters have been on the scene since 11:58 a.m.

Fire was seen coming out of the building's roof. An estimated 15 fire units have responded to this structure fire. The fire department continues to investigate the cause of this fire.

The Milwaukee County Sheriff's Office has closed the airport spur, Hwy. 119, because of this fire. They suggest an alternate route to the airport at College, Layton, or Howell.

Milwaukee County buses have been rerouted around this fire. Route 19 is being detoured to 20th St. between Grange St. and College Ave.

Flights at General Mitchell International Airport have not been affected by this fire.