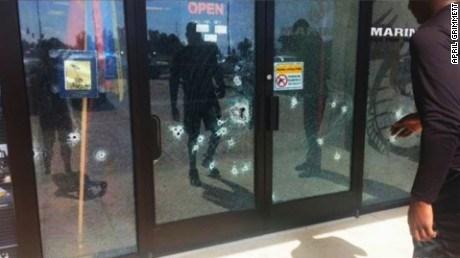 (CNN) A U.S. Navy sailor wounded in a shooting rampage in Tennessee died early Saturday, according to the Navy, becoming the fifth U.S. service member killed the attack.

The Navy did not release his name. However, a relative earlier identified the one sailor injured in the attack as Randall Smith.

Smith, a logistics specialist, was shot in the liver, colon and stomach, according to his grandmother, Linda Wallace.

A community in mourning

On Friday, hundreds in Chattanooga packed the Olivet Baptist Church for a prayer vigil. There were Christians. There were Muslims. A cross-section of the Tennessee community

\"I thought it was beautiful ... the community coming together,\" Iman Ali told CNN affiliate WTVC. \"It was truly something beautiful and I wanted to be there to honor the lives of those Marines.\"

\"We fought to preserve this great country which is America and when one is down, all are down,\" he said.

There was also talk of healing and moving forward as a community.

\"Tonight, love and forgiveness and belief in one another was the theme, because that's what 'Chattanooga Strong' means,\" Mayor Andy Berke told affiliate WDEF.

The military has released the names of the four slain Marines. They are: Thomas Sullivan, a native of Hampden, Massachusetts; Squire \"Skip\" Wells, a native of Marietta, Georgia; David Wyatt, a native of Burke, North Carolina; and Carson Holmquist of Grantsburg, Wisconsin.

All were combat veterans, according to a senior defense official.

When the shooting broke out, they went into combat mode, had everybody drop to the floor, and then \"cleared the room\" by having everyone go out the back, the official said. All seven people in the center survived, and reports indicate those Marines helped save lives.

Abdulazeez had a handgun and two long guns in his possession when police killed him Thursday at a Navy Operational Support Center, and another rifle was seized when police searched his home, the official said.

The rampage
Thursday's shooting spree began at a strip mall when Abdulazeez opened fire on a military recruiting center.

Over the next half-hour, the gunman, a graduate of the University of Tennessee at Chattanooga, drove his rental car to the Navy operational support center seven miles away, a law enforcement official said.

hattanooga Police Chief Fred Fletcher told CNN that police followed and engaged Abdulazeez somewhere on the road after that, then again at the second site. He said authorities are still trying to determine whether police saw him ram the gates of the center, get into the facility and shoot and kill the four Marines.

He kept police at bay for some time before himself being killed.

Looking for a motive
Authorities are trying to figure out why Abdulazeez -- an accomplished student, well-liked peer, mixed martial arts fighter and devout Muslim -- went on the killing spree.

U.S. Attorney Bill Killian said the shootings are being investigated as an \"act of domestic terrorism,\" but he noted the incident has not yet been classified as terrorism.

Reinhold said there is nothing to connect the attacker to ISIS or other international terror groups. Abdulazeez was not on any U.S. databases of suspected terrorists.

He was not known to have been in trouble with the law except for a DUI arrest in April. He apparently was not active on social media -- one of the common ways police investigate terrorism.

His family
The father of Abdulazeez was investigated -- and cleared, twice -- as part of an FBI probe into terrorism financing, law enforcement officials said.

Officials stressed that Abdulazeez's father was one of many people investigated for their funding of overseas charities, especially after the September 11, 2001, terrorist attacks. Most of them were never charged with a crime.

The president of the Islamic Society of Greater Chattanooga told WDEF that Abdulazeez's father called him after the shooting.

\"He was in the dark on what his son has done, he's very devastated,\" Bassam Issa said. The father \"actually apologized for what his son did to the community at large and to the Muslim community and I told him we all feel distraught, we all feel shocked.\"

'Something happened over there'

While Abdulazeez was a devout Muslim, he didn't appear to be radical, according to some who knew him. He was born in Kuwait but became a naturalized American citizen.

Jordanian sources said Abdulazeez had been in Jordan as recently as 2014 visiting an uncle. He had also visited Kuwait and Jordan in 2010, Kuwait's Interior Ministry said.

A longtime friend said Abdulazeez changed after spending time in the Middle East and \"distanced himself\" for the first few months after returning to Tennessee.

\"Something happened over there,\" Abdulrazzak Brizada told CNN, saying, \"he never became close to me like he was before he went overseas ... I'm sure he had something that happened to him overseas.\"