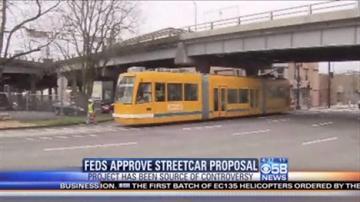 MILWAUKEE -- A proposed streetcar for the city is another step closer to departure.

The federal government approved a new route for Milwaukee's proposed streetcar line that would link the Milwaukee Intermodal Station with the lower east side,

The city has to make changes to the route to avoid the cost of moving underground utility lines.

Some utility lines will still need to be moved, however, the Federal transit Administration calls it a \"minimal impact\".

Mayor Tom Barrett is using long-idle federal transportation dollars to pay for the project, and hopes to break ground later this year.

Alderman Bob Donovan remains a critic of the project, saying funding for the streetcar should be reallocated for more pressing needs.