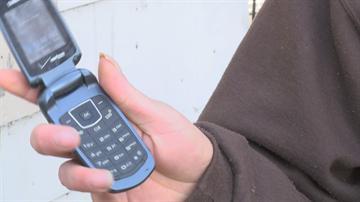 RACINE -- The federal Lifeline program gives a free phone to low-income families who can't afford to pay for cell service.  Wisconsin started a database to help crack down on fraud and abuse within that program.  Now, the Federal Communications Commission is taking Wisconsin's lead, starting a database of its own.

People like Karrie Petersen rely on their lifeline phones to keep in touch with family, friends, and in her case, her lawyer.

She thinks the new database is a good thing, but worries those anti-fraud measures could be causing a problem in her life accidentally.  Earlier this week she ran into some trouble.

Her free cell refills with 250 minutes near the beginning of every month.  Petersen says she didn't use anywhere near  that.

\"[The provider] told me I can buy more minutes,\" Petersen said.  \"I don't have a job.  My boyfriend's not working at this time either.\"

Petersen worries her housing situation might be throwing up a red flag.  Her house in Racine has several other  separate homes attached -- all using the same address.  The lifeline program only allows one free phone per  household.

\"The idea that somehow we would want these people to get out of poverty, it's almost not going to happen if  they're unreachable by phone these days,\" Public Service Commission of Wisconsin's Jeff Richter said.

Richter helps oversee the Lifeline program.  He says the system was open to  widespread fraud and abuse.

\"These providers could actually just hand phones out on a street corner and literally be receiving compensation  from the federal government,\" Petersen said.

Richter believes combining Wisconsin's CARES database with the federal government's new one could eliminate nearly all of those problems.

\"Let's make accountability across the board and the individual has to show they are who they are and be qualified  through the database,\" Richter said.  \"The other piece of that is the provider, in saying that they've been checked.\"

Richter doesn't know if Petersen's problems relate to her address or if she simply hasn't responded to re-verification requests.  Peterson claims she never received a notice.  She just hopes the minutes return next month.

\"It's like my boyfriend said... You get what you pay for,\" Petersen said.

The FCC is rolling out its database across the states in groups.  Wisconsin is in group number five.  That list goes active Thursday, March 20.