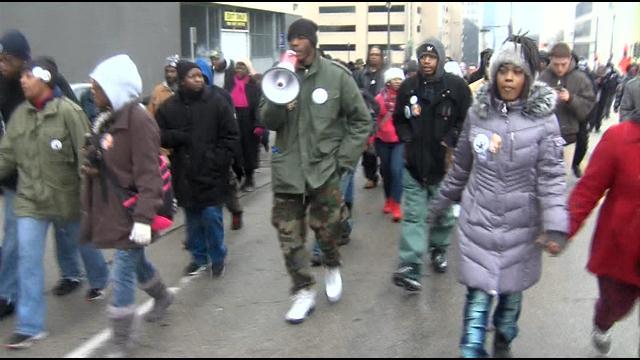 The National Guard was on standby, but not needed Monday.

A relief for a city bracing for potential violence after the announcement that no charges would be against former Milwaukee Police Officer Christopher Manney following the shooting death of Dontre Hamilton in Red Arrow Park on April 30.  Supporters of Dontre Hamilton have been demonstrating for months, calling for criminal charges against Manney.

Demonstrators shut down I-43 on Friday, which lead to more than 70 arrests.  In the aftermath of those demonstrations, Milwaukee County Sheriff David Clarke, with Governor Scott Walker's approval, put National Guard troops on standby near Milwaukee.  Milwaukee Police reported one arrest Monday, but for a warrant not related to any of the demonstrations.

Supporters of Dontre Hamilton started the day at Red Arrow Park, where Hamilton was shot and killed by MPD Officer Christopher Manney. Then the group of about 100 people walked to the Federal Courthouse, where they railed against the decision not to charge Manney.  The group then took to the streets of downtown Milwaukee chanting for justice.  After regrouping at All People's Church on the north side, they returned to Red Arrow Park.

Another demonstration is planned for 5pm Tuesday at Red Arrow Park.