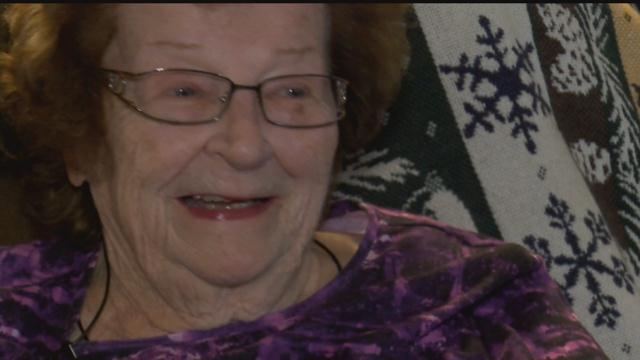 No weapons, no threats, just a fearless 92-year-old woman who used her eyes to scare away a would-be burglar on East Frontage Road.

But the incident cannot take away from Verne Funk’s personality.

This is unfortunately how it happened. While sitting in her living room Sunday afternoon, she heard a noise in the back of her home. It was actually the guy trying to get in.

"He wouldn't have found anything, maybe 20 dollars,” Funk said.

Verne Funk said she came to the back room, she saw the man standing on the garbage can trying to get through the back window. The screen had been removed. When they locked eyes on each other, the man ran away.

She believes the man was in the back yard for quite some time for two reasons. Number one, things were out of place inside her garage, and the family found fresh dirt inside her boat.

Funk said could not provide a description, but said the suspect was a “good looking man”.

Surprisingly, Funk is not bothered one bit.

"He got away and everything and I wasn't scared of him or anything,” Funk said.

Caledonia Police told CBS 58 they have a person of interest they are now looking for.

"We believe he's operating a white 2014 patriot with Wisconsin registration of 111XJB, and we'd like to speak to him,” Sgt. Jim Gardner said. “He is a person of interest at this time. We'd like to see if he has any involvement in this incident because this camper was found so close to where the burglary happened."

The fearless mother and grandmother doesn’t care for any more unexpected visitors at her house on East Frontage Road.

"And a shotgun,” Funk jokingly said.

Anyone with information on the person of interest should call the Caledonia Police Department.