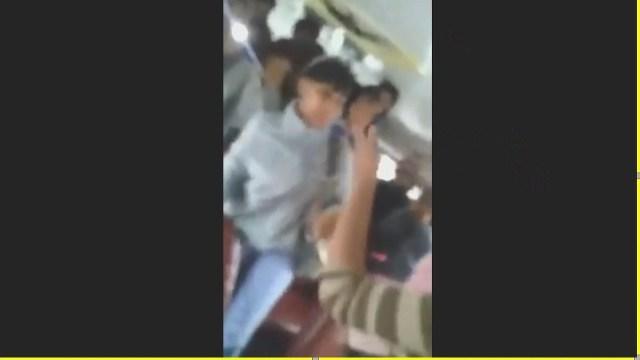 The video is startling - you see 13-year-old Qu'avana Harris take punch after punch as she's riding the school bus home.

\"I looked away, and I looked back at her and she hit me, and that's when I froze and I got up and asked the bus driver to let me off the bus,\" Qu'avana said.

But she wasn't let off the bus, and the bus continued on its route. So how did this attack even happen?

Qu'avana says the day ended like any other. She left Roosevelt Middle School and walked toward her bus. However, this particular day was different. There were two girls in hooded sweatshirts with their backs to her and she says from the start she had a bad feeling.

She had a prior issue with classmates, one that was resolved in mediation, but the girls had warned her that their friends would attack. The girls claimed Qu'avana was talking about them on Facebook.

Then -- the punches started. Qu'avana's father Howard describes what he saw when she got off the bus.

\"Her left eye was swollen, you can see the redness. Around her eye and I just really look past that and see the hurt in my child's eyes and that was the biggest injury I've seen.\"

Qu'avana says it wasn't until the other girls got off the bus that the driver even talked to her.

\"She said what happened and I said you just saw it in the mirror what do you mean??\"

Once Qu'avana's father picked her up, two family members called to tell him video of the fight had gone viral on Facebook.

\"Somehow it got in the hands of 100 people in a matter of 30 minutes the fight was up on Facebook within a matter of minutes,\" Howard said.

Both Qu'avana and her father believe the driver knew the alleged attackers and allowed the girls, who reportedly don't go to Roosevelt, on the bus.

\"I called the bus driver and she said she let one of the girls on because she thought she was just suspended, what troubles me is this other little girl you've never seen before is on your bus,\" Howard said.

Howard says he went to the home of one of the girls who attacked his daughter to try to work things out, but according to Milwaukee Police, he was given a disorderly conduct ticket after the interaction.

An MPS spokesman says \"We take it very seriously. Both the district and the bus company are investigating and taking appropriate disciplinary action.\"

We also reached out to Lakeside Busing Company, who says they are also investigating.