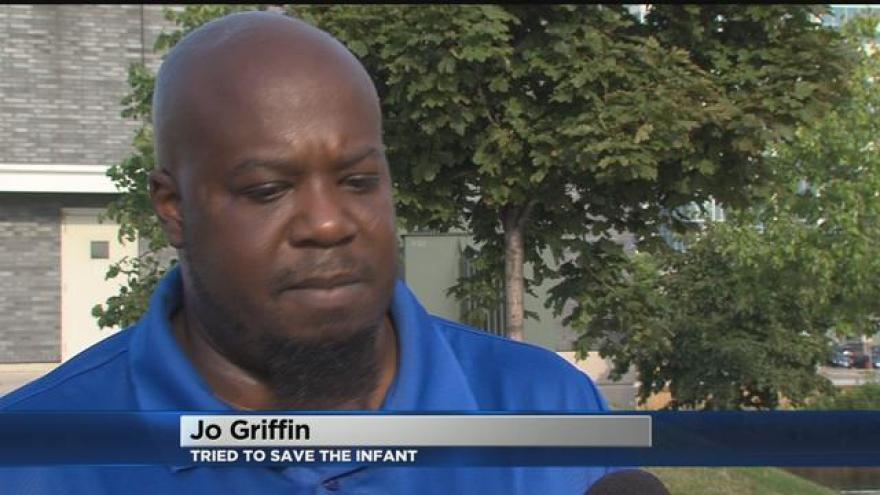 These first hand accounts of the drowning this weekend coming to light as Sean Flowers appeared in court for the first time today.
This father is accused of drowning his child during a family get together at a pond.
According the criminal complaint Sean Flowers didn't like the way his child's mother was dancing, he got upset then took the child, and drowned him as family and strangers tried to stop him.
"The sound of the screams, hearing her yell, my baby," says Griffin.
Those screams made Jo Griffin stop eating dinner Saturday night rush outside jump in the water and search.
"I saw this little baby float up right next to him. So I grabbed it and tried to swim away. He lunged, took it back. Having a limp infant in my hands is going to haunt me for the rest of my life,"
Griffin says he tried to get the child back but says Flowers was too far away and was murmuring to himself.
"It was jibberish, it didn't make sense. He was saying something like Abraham killed his son Issac," says Griffin.
After several minutes it was an officer who found the baby.
"He sprinted back to shore. I've never seen someone move that fast in water before. Those police officers they were destroyed afterwards. We all cried we all did," says Griffin.
Flowers is now charged with murder.
"This defendant carried out this offense in front of multiple members of his own family who were begging and pleading him to stop. During our conversation he showed a great deal of remorse," says the State.
The state says - Flowers focused on himself asking how much time he would get without remorse for his child.
Meanwhile Griffin says - his nightmares won't stop.
"I should have been there faster should have fought harder. I feel guilt because of the outcome," says Griffin.

Flowers has a bail of one million dollars. He's due back in court August 11th. There's a vigil for the baby at 12:30 Wednesday August 3rd at the Glenbrook Apartments.