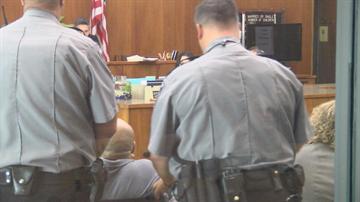 MILWAUKEE -- The father charged with sexually assaulting his daughters has repeatedly interrupted his trial with outbursts, even while acting as his own attorney.  Monday, that man, referred to as \"E.B.\" refused to take the stand in his own defense.

But the show continued on day five of the trial.

\"Since you fancy yourself a constitutional law expert, you would know you have a right to defend  yourself, but that is not an absolute right,\" Judge Borowski said to E.B. after another outburst.  \"You're done, you'll go back into the bullpen.\"

Prosecutors finished their case late Monday morning.  Assistant District Attorney Sara Lewis called three  final witnesses to the stand, including a detective who interviewed E.B. after his arrest.  That  interview was taped.

\"It was a challenge to keep him at a calm demeanor,\" the detective said.

After lunch, the defense was given the chance to present its case.  Standby Counsel Scott  Anderson told the judge his only witness, E.B., refused to testify.  Still, the defendant claimed  his rights were being violated.

\"I also have the right not to testify, which i have chosen and  stated that several times.  So, do you understand that, sir,\" E.B. said.

\"He has made many clear  statements,\" Judge Borowski said.  \"His attitude is bordering on contempt.\"  E.B. responded with, \"Oh, oops.\"

Without any witnesses to call, the defense rested its case.

\"He is, just so the record's clear, the single most difficult defendant i have dealt with in ten years on the bench,\" Borowski said.

Prosecutors dropped nine charges because they felt testimony wouldn't necessarily stand up for them.  That still leaves 33 felony counts for the jury to consider.  They'll take up deliberations Tuesday.