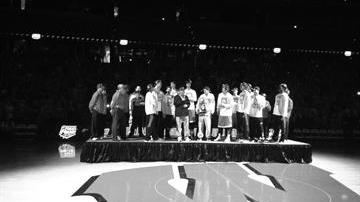 MADISON - Thousands of fans packed the Kohl Center to welcome home the West Regional Champion Wisconsin Badgers on Sunday. The Badgers won an overtime thriller Saturday Night in California against Arizona to make it to their first Final Four since 2000. The team thanked fans for supporting them all year and said they'll be working hard to bring home their first National Championship since 1941. The Badgers will take on the Kentucky Wildcats on Saturday Night in Dallas for the right to fly in the title game the following Monday.