Fan dies after falling from upper deck at Braves-Yankees game 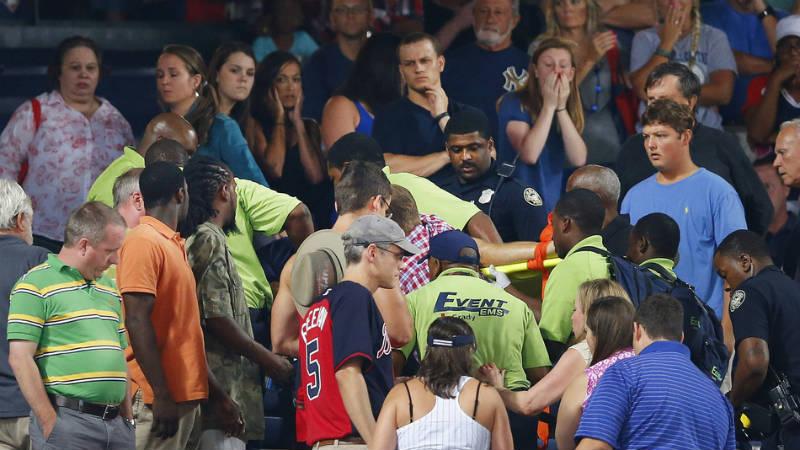 ATLANTA (CNN) -- A man who fell from the upper deck of Atlanta's Turner Field during a Braves-Yankees game has died, the Atlanta Braves said.

Gregory Murrey, 60, of Alpharetta, Georgia, tumbled out of the stands during the seventh inning of the game Saturday night as the New York Yankees' Alex Rodriguez was walking to home plate.

\"Gregory 'Ace' Murrey was a husband, father, grandfather, son, brother, and friend to many,\" his family said in a statement to CNN. \"He dearly loved his family, Atlanta, and the Atlanta Braves. Greg was a season ticket holder with the same seats for 23 years. The night Greg passed away, he was doing one of his favorite things -- watching the Braves.

\"At this time, the family wishes for you to respect their privacy as they mourn the less of such an extraordinarily wonderful man.\"

\"The Atlanta Braves are deeply saddened by the loss of Greg Murrey at last night's game,\" the team said in a statement. \"Greg was a valued and longtime season ticket holder and an incredibly passionate Braves fan. This tragic loss is felt throughout Braves Country, and the thoughts and prayers of the entire Braves organization continue to go out to his family and friends.\"

Atlanta police are still trying to determine why Murrey fell, but said they do not suspect foul play.

Murrey tumbled head over feet before hitting the concrete walkway in front of a row of fans. He hit some of the lines attached to the backstop as he fell.

Paramedics worked on him for several minutes before taking him off on an orange backboard, said CNN's Southeast Bureau chief Marylynn Ryan, who was sitting a few sections from where Murrey landed.

The game continued while fans were escorted from the section where Murrey lay as a medic performed CPR.

The Fulton County Medical Examiner's Office said an autopsy will be done later Sunday to determine a cause of death.

Over the past few years, several people have died from falls at sporting arenas nationwide.

In 2013, a man committed suicide during a Braves-Phillies game when he jumped about 85 feet from an upper level at Turner Field.

In 2011, a 39-year-old man fell to his death while trying to catch a ball at a Texas Rangers game. He stuck out his glove and reached for the ball, but lost his balance and flipped over the railing of the outfield seats, crashing headfirst into a scoreboard.

That same year, a man trying to slide down a railing at Coors Field at a Colorado Rockies game fell and died. An autopsy later found marijuana in his system, as well as a blood alcohol level more than twice the legal limit for driving.