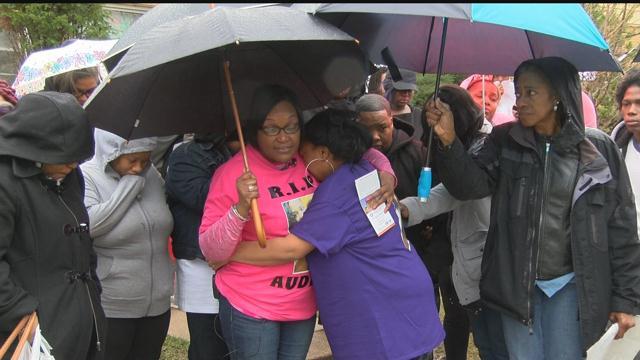 CBS 58—Family and friends gathered Friday night to remember an 18-year-old who was shot and killed this week.

Police are still searching for the 19-year-old suspect in the murder of 18-year-old Audrea Williams. It happened Wednesday afternoon, after what police called a domestic dispute.

Friday night, the focus was on Audrea, at a vigil held by family and friends. Dozens gathered at 81st and Villard, near where Audrea was killed. She was remembered as a daughter, friend and new mother, who always had a smile on her face.

“She loved to dance, do hair,” said Keshonda Petty, Audrea’s cousin. “She loved to smile, loved to just live life. She was very ambitious. And she loved her prince, dearly.”

Her prince is what family says Audrea called her 2-month old son, Audric.

“She fully embraced the role of being a mother,” Petty said. “It was her greatest joy.”

Too overcome with grief to speak, Audrea's mother, Tracy, had one simple plea to the suspect, the father of Audrea's son.

“Turn yourself in,” Tracy pleaded.

And though they are choosing to focus on Audrea's life, her family says they want people to be aware of how she died.

“Domestic violence is not gender specific,” Petty said. “It is not racially specific. It is not a social economic issue.”

Petty says she hopes others can learn from what happened to Audrea.

“If you find yourself in these situations, get help,” Petty said. “Help is out there. You don't have to stay.”

Petty says Audrea’s son is in protective custody until the suspect is caught. In the meantime, the family is collecting items to help with his care. The public can drop off donations Saturday April 2, between 2 and 4 PM at Atkinson Library, 1960 W. Atkinson Ave., Milwaukee. The family is asking for items for a newborn: diapers, blankets, a stroller, a car seat, those kinds of things.

If you want to make a monetary donation there is a GoFundMe site set up: https://www.gofundme.com/trwyvnhk