Family of Tony Robinson to file lawsuit against city and officer 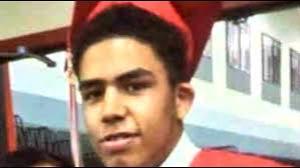 The family of a 19-year old Madison teen who was shot and killed by a police officer in March says they will file a civil lawsuit against the city and the officer who fired the fatal shot.

Tony Robinson was fatally shot by Madison Police Officer Matthew Kenny on March 6th.  Officer Kenny was responding to reports that Robinson was jumping in front of cars on Williamson Street and had attempted to strangle someone.  Despite the fact that Robinson was unarmed, the shooting was determined to be justified self-defense by the Dane County District Attorney.

Police say that Officer Kenny followed Robinson into a home on Williamson Street thinking he heard a disturbance inside.  Once inside, Investigators say Robinson confronted Officer Kenny and even hit him in the head.  Officer Kenny shouted at Robinson and retreated back through a doorway, firing his weapon 7 times at Robinson.  Police reports indicate Kenny performed CPR on Robinson, who died later at a hospital.

The Dane County District Attorney's Office did not charge Officer Kenny in the shooting, based on evidence compiled in an investigation by state police. An internal review also found Kenny complied with the department's policy on using deadly force.

Robinson’s family says the lawsuit will be filed by Chicago civil rights law firm Loevy & Loevy and will argue Officer Kenny shot and killed Tony Robinson without any lawful justification.