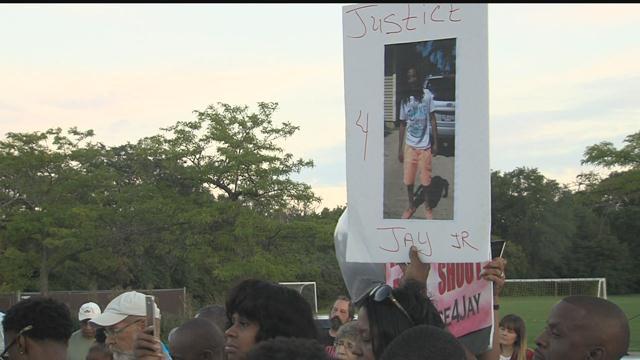 CBS 58— It's been two months since Jay Anderson Jr. was shot and killed by a Wauwatosa police officer at Madison park, and Tuesday night his friends and family gathered as they wait for news about the investigation.

The Milwaukee Police Department handled the investigation, due to a state law requiring an outside agency to investigate officer involved deaths. That investigation is complete and is now in the hands of the Milwaukee County District Attorney, who will decide if any charges will be filed.

“He's supposed to be here with us,” said Starkeisha Delarosa, Anderson Jr.’s fiance. “He's supposed be with me to raise his kids.”

At the Tuesday night vigil, family and friends prayed, released balloons and renewed the call for answers in the case.

Delarosa says she thinks the unrest in Milwaukee, over another officer involved shooting last week, is slowing the progress in the Anderson case.

“His story is not being swept under the rug. There's a lot going on in Milwaukee this past week, and Jay's story are not being heard,” Delarosa said. “I just want everybody to know I will not let his story go.”

The Wauwatosa Police Department has so far declined to release that video. And, in the month since the District Attorney began to review the investigation, the family says they haven't heard anything.

The family is planning another rally Saturday afternoon in Madison Park.