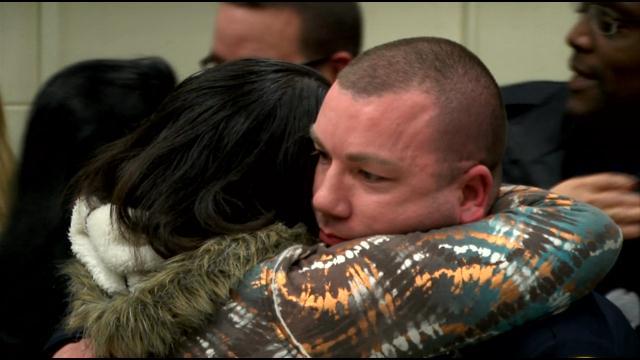 The plaque says 'Laylah's Angels,\" it includes the names of all the officers that have helped her family through their tragedy.

\"There's something that I can say about each one of our first responding officers and the officers that continued to afterwards,\" said Ashley Fogl, Petersen's mother.

Tuesday marks two months since Petersen was killed by stray gunfire.  Petersen was sitting in her grandfather's lap, like 5-year old's should be.

\"My baby was listening to her sister read,\" recalled Fogl, \"we have our routine, sissy reads and Laylah listens.\"

Nearly 60 days later, no word on who killed Petersen.  Alongside Sierra Guyton and Bill Thao, she's one of 3 Milwaukee children who died in shootings last year.

\"There's too many young men out there with too many guns,\" said Chief Ed Flynn, of the Milwaukee Police Department, \"and somehow, they've defined masculinity with random, wanton violence.\"

Police and Petersen's family won't rest until they find her killer.

\"If we find out who you are, you're going to spend the rest of your life in jail,\" said Chief Flynn.

Petersen's family will also hold a fundraiser to raise money for her headstone.  The fundraiser will be held Tuesday at BD's Mongolian Grill at Bayshore Town Center in Glendale.  Diners will need to tell the dining room staff they are there for the Laylah Petersen Fundraiser.