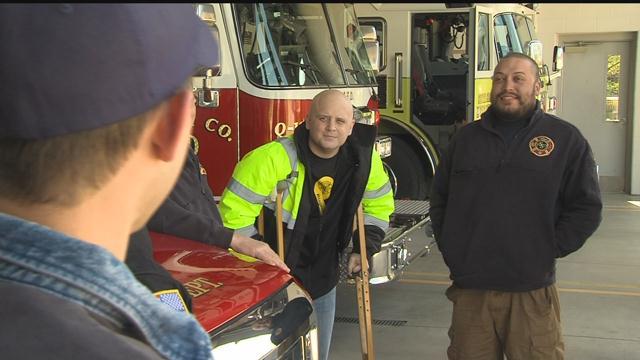 Laughter can be the best medicine for someone getting chemotherapy.

"I'm there for about three hours," said Rudi Betancourt. "The drugs take about an hour and a half to get in."

Firefighters Rudi Betancourt and Alex Hagen were diagnosed with cancer in March, about a year after each of them started their careers with the South Shore and Caledonia fire departments.

Hagen broke his leg on a call and that's how doctors found he had a rare form of bone cancer. There are less than 1,000 cases a year of Ewing Sarcoma.

Betancourt is fighting Hodgkin's Lymphoma, one of the most curable forms of cancer.

Doctors found a tumor in his chest after initial concerns about swelling in his neck that could have affected his voice.

"One of the nerves that affects my vocal cords could have been compressed when my swelling was at its worst," he said.

Fellow firefighters are taking care of their own by cooking, raising money and providing moral support. It's a debt of gratitude the two young men look forward to repaying, after battling through the fire together.

"There's nothing we're going to let them go through alone," said South Shore firefighter James Davis. "They're always gonna have someone there for them."

Both firefighters hope to get back to work as soon as they've recovered.

In the meantime, there's a benefit for Alex Hagen on Sunday, May 22. Family and friends will gather from 1-5 p.m. at Rivals Sports Pub and Grille, located at 6325 120th Ave. in Kenosha.