Families of Florida teens missing at sea not giving up hope, mother says 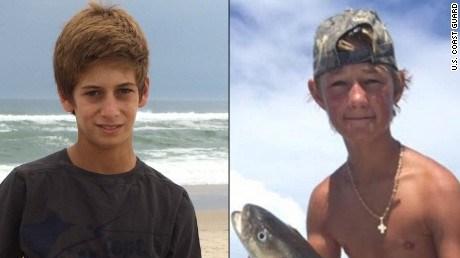 The families of two 14-year-old boys who went missing on a fishing trip off the Florida coast believe they'll be found, one of the boys' mothers said Monday morning.

Perry Cohen and Austin Stephanos were last seen Friday around Jupiter, Florida. The Coast Guard said Sunday that teams had spotted the 19-foot boat in which the teens had been traveling. The capsized vessel was discovered 67 nautical miles (about 77 miles, or 124 kilometers) off Florida's Ponce de Leon Inlet, the Coast Guard said.

\"This is still considered an active search and rescue case, and we maintain our perpetual optimism that we're going to find somebody,\" Petty Officer 1st Class Stephen Lehmann told reporters.

The capsized boat has given search teams a new launching point to refocus their efforts, he said. Using models of speed and currents, Lehmann said the search area is now about 33,500 square miles, roughly the size of Maine.

\"We just keep on praying, man,\" said Joe Namath, a renowned former NFL quarterback and neighbor of the teens. He told reporters Sunday that he was helping with the search, according to CNN affiliate WPTV. \"It's hard, it's so hard, but we've got to believe in their wherewithal.\"

The boys' families are offering a $100,000 reward for their rescue and are asking experienced boaters in the area to help in the search.

\"They know the waters. They've been through rough water, they've been through thin water. ... Those are salty dog kids, and they know what they're doing out there,\" said Nick Korniloff, Perry's stepfather, who told reporters Sunday that the families would stop at nothing to bring their children home.

The teens were last seen Friday when they bought $110 worth of fuel before setting out on their trip.

\"We're heavily concerned for their well-being, and we're doing everything we can do to bring them back home,\" Barney said.

The discovery of the capsized boat, he said, means the missing teens could be in a direr situation than officials feared.

And spotting people in the water isn't easy, Lehmann said.

\"It can be very tricky, especially searching from the air. It's a needle in a haystack out there,\" he said, \"and that's one of the reasons life jackets are orange, so it gives us better visibility in cases like this.\"

It's unknown whether the boys are wearing life jackets, he said.

Early reports to the Coast Guard indicated the boys had told others they planned to travel to the Bahamas.

Officials and family members say they don't know whether that's what the teens had in mind when they set sail Friday. Now, they say their only concern is bringing them home.

People packed the bleachers at Jupiter Christian School on Sunday evening, their heads bowed in prayer.

Michael Dube, the upper school principal, called for parents to pray for the missing boys as if they were their own children.

\"We pray that Austin and Perry will be found safe,\" he said, \"that they will be returned home to their moms and their dads, that will hug them and kiss them and love them.\"