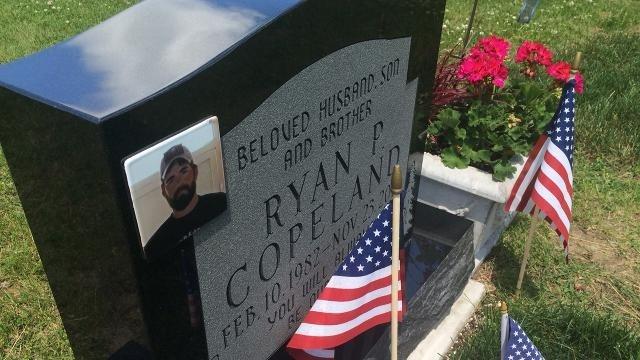 The Rock County gravesite of a McFarland officer who was killed in the line of duty a few months ago was vandalized. One of two photos on Officer Ryan Copeland's headstone was stolen.

Copeland, 33, was an officer with the McFarland Police Department for two years and was paired with K-9 Boris. On Nov. 23, Copeland was on his way to pick up Boris when a truck crossed the center line on County Road N just outside of Albion, slamming into Copeland’s squad car, killing him.

Copeland was buried at Mt. Olivet Cemetery in Janesville a few days after his death.

Craig Gramke of Gramke Monument Works had just assembled and installed the headstone at Mt. Olivet Cemetery on May 25. Copeland’s widow, Amanda, visited the gravesite with her family over Memorial Day weekend and found that a picture of Copeland and Boris had been taken off the stone.

Gramke said cemetery workers noticed the picture was gone as soon as Friday.

“This was definitely removed on purpose,” Gramke said.

Gramke said he has used the same adhesive to mount pictures to headstones for decades, and he has had to develop a special method for removing pictures because the adhesive is so effective.

"I’ve never had somebody take one before," Gramke said. "I’m sure if it had fallen off, it would either still be (lying) here or somebody would have turned it in to the cemetery office. It wouldn’t just disappear."

Even more odd, Gramke said, was that almost no adhesive was left behind, and the stone was left unscathed.

Gramke said vandalism in cemeteries has become a growing trend over the last five years or so, but most of the time, it's overt damage and not someone carefully removing a picture from a memorial.

“If somebody wanted that picture, they could have had it without having to do this,” Gramke said.

Gramke said the company that makes the pictures for headstones already has Copeland’s photo on file and will be replacing it in the next few weeks.

Janesville police said that over the last three years, there have been no reported cases of vandalism at Mt. Olivet Cemetery. There was incident at an adjacent cemetery, Oak Hill, where someone spray-painted eight gravestones last year. That person was caught.

Amanda Copeland did not want to comment on camera, but she said the situation is “disappointing."