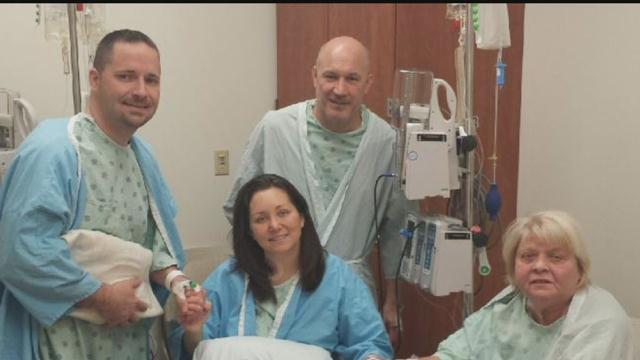 "You accept it and you tend to try and do your best and to live life," she said.

Through it all, she she still found strength to volunteer at The Ridge Community Church in Greenfield. In the hallway one day, she came across fellow member Jeff Teronde.

"I would talk to her and just periodically ask her for an update, how was the dialysis," he said.

"And I told him truthfully, not good," she said. "So I looked a him and I says, 'do you have a spare kidney?' He laughed and I laughed."

"It kind of dawned on me for the first time, I could seriously consider doing that," said Teronde.

A man of faith, Teronde said he went home and prayed about it. A verse from Proverbs gave him an answer.

"You shouldn't withhold good from those who are deserving when it's in your power to act," he said about the verse.

About two weeks later, in that very same hallway, Teronde caught up with Weber once again.

"I said, 'hey Kathy, I know you're looking for a kidney, I'd be willing to donate one of mine,'" he said. "And she stopped in her tracks and was stunned."

Unfortunately, testing revealed the two were not a match. But a search by the transplant center uncovered a paired exchange, one person's donation that can start an entire chain.

Froedtert and the Medical College of Wisconsin did 10 paired exchange kidney transplants last year. Two of them were all because of Teronde.

"My kidney was fit for a lady from Illinois, her husband's kidney was a match for Kathy," Teronde said.

"He's given me renewed life, even though I didn't get his kidney, he helped me and another lady," said Weber. "It's given me confidence in humanity."

The group of four will celebrate the one year anniversary of their transplant on December 17. They and doctors hope their story inspires others to become a live donor. You can register to see if you're a match by clicking here.