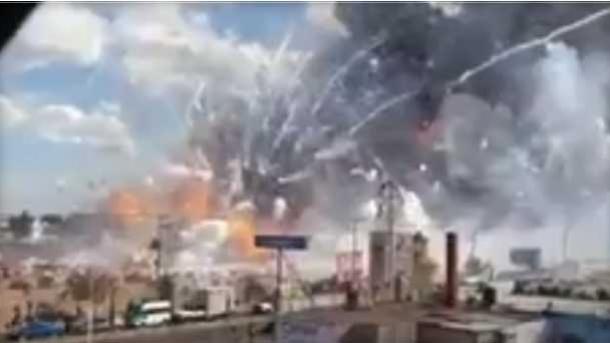 MEXICO CITY (CBS NEWS)  -- An explosion has ripped through Mexico’s best-known fireworks market on the northern outskirts of the capital.

Azteca TV, citing the mayor of Tultepec, where market is located, reported that 12 people were dead. State police said that least 70 wounded, according to Mexico’s leading newspaper, Reforma.

Images broadcast by Milenio TV on Tuesday afternoon show a huge plume of smoke billowing into the sky above the open-air San Pablito Market in Tultepec, in the State of Mexico. Video obtained from social media also showed sparks and flames shooting through the air.

In 2005, a fire engulfed the same market, touching off a chain of explosions that leveled hundreds of stalls just ahead of Mexico’s Independence Day. A similar fire at the San Pablito Market also destroyed hundreds of stands in September 2006.

Many in Mexico traditionally celebrate holidays - including Christmas and New Year’s - by setting off noisy firecrackers and rockets.