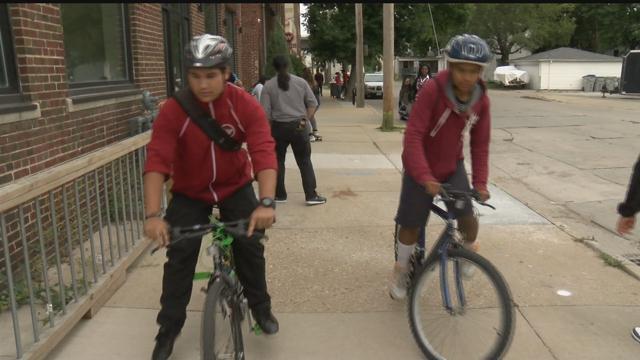 Every day, Dominic Schiro bikes about three miles from home to school, where he's a sophomore at Escuela Verde.

He's been hit by a car before.

\"He thought I was turning right along with him,\" said Schiro. \"So he bumped into me and I scraped up my elbows and my knees.\"

So he learned the basics to avoid that fate again.

\"You have to indicate,\" he said demonstrating the signals. \"Right, left, stopping.\"

It's knowledge Dave Schlabowske, deputy director for the Wisconsin Bike Fed, said prevents tragedies for kids and drivers. Those behind the wheel must pay attention to those neon school signs and be extra cautious in neighborhoods.

\"Kids often don't stop. So they'll do a ride out,\" Schlabowske said. \"They'll come out of the driveway without looking or they'll ride down the sidewalk and just jump out.\"

Biking on the sidewalk and riding against traffic are two big mistakes parents make when teaching bike safety.

\"A bicycle goes so fast on a sidewalk that people in cars scan with their peripheral vision,\" he said. \"They may not see it coming.\"

It is legal to pedal through a red light in Wisconsin.
The law states if you get to an intersection and believe the traffic light is not sensored to detect bicycles, stop and wait 45 seconds.

\"Many cycles are 90 seconds, so the law is written a little bit against what traffic engineering has designed for our intersections,\" said Schlabowske. \"So I'd encourage people to wait a minute, minute and a half before they think they can go.\"

Running red lights is Schiro's pet peeve and has this advice to stay upright.

The Wisconsin Bike Fed encourages parents to start bike safety with their kids at an early age and ride as a family. The organization teaches about 2,500 kids each year through its Safe Routes to School Program.