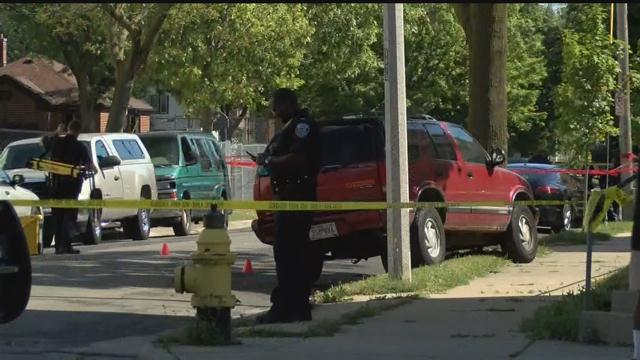 Neighbors say bullets were flying  at Columbia Park following the violent foot chase on 14th Street. And in video you'll only see on CBS 58, the man who reportedly started it all is caught by police.

A witness tells us the man you see on the ground is the one who started it all, when he ran out of that Porsche, stolen from a car dealership in Glendale.

Witnesses say the 28 year old man had a rifle and when he ran from police, he turned around and shot at them, grazing an officer in the face.

Police confirm a Glendale officer was hit and in this exclusive video you can see another officer inspecting the side of his face.

That suspect led Milwaukee and Glendale police on a foot chase that went through Columbia playground.

Another man says shots were flying.

\"I don't know who shot first but it was like we were in a war zone,\" said the witness.

He expresses the concern many people told us: the park was filled with children and they can't believe more people weren't injured.

\"The kids be normally in the playground playing basketball and swinging. This right here is senseless it needs to stop,\" he said.