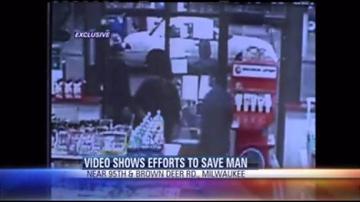 MILWAUKEE -- Frightening surveillance video from a gas station near 95th and Brown Deer Road shows a man's final moments after he and a woman were shot a short distance away.

The man ran to a nearby gas station for help, where he collapsed. Exclusive video obtained by CBS 58 shows customers trying to help the man and put pressure on an apparent chest wound.

Muhammed Mateen is a clerk at the gas station and remembers seeing the victim come in.

\"I was taking a customer and then one guy came and said that there was a shooting, some shooting going on outside,\" Mateen recalls. \"I go and look and the guy was coming from the parking lot and he had blood in his mouth and everything. I opened the door to him and he just come inside and just lay down.\"

Despite life-saving efforts by the Milwaukee Fire Department, the victim died of his injuries a short time later.

The 33-year-old woman is recovering at a local hospital.

There's no immediate word on a motive or suspects in the shooting.

Look for updates on this developing story on our website and on the CBS 58 News at Noon, 5p.m. and 10 p.m.