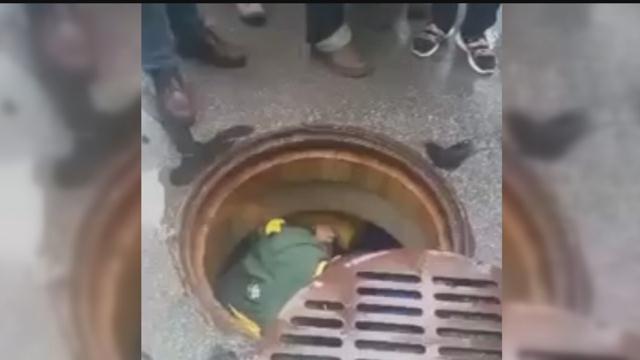 Under the watchful eyes of a Bart Starr statue, CBS 58 meets the fan who made a catch any Packers quarterback would be proud of.

Omar Velaochaga grew up in the Waukesha area and said last weekend's Packers vs. Cowboys game was his first time to the stadium in Titletown. We meet up with him at Jeff's Sport Memorabilia in Brookfield.

"We were probably, I would say, five feet away from the metal detectors to get into Lambeau when it happened, Velaochaga said.

Velaochaga is the focus of a video posted to YouTube by his friend Chris Bucher. It's been shared and viewed close to a million time online across social media.

And it all started with a joke, Velaochaga said.

"There is this grate or the sewer lid and the sarcastic person that I am, I guess, I take out the ticket out of my pocket and I taunted in front of him like 'What? Like one of us is going to drop it?'," Velaochaga said.

"We all watch it, in slow motion, just falling down, until it got really close to the grate. And I was like, I hope it lands. And then it just goes right under it," Velaochaga said.

That's when a random person in line yelled that the grates come off. And despite the rainy weather, Velaochaga made a decision.

"I'd rather be this guy - the one that went into a sewer - than be the guy who lost his ticket in the sewer and sat in the car for three hours while everybody else went into the game," Velaochaga said.

That's when the camera starts rolling.

"So I just go a couple steps down and I just couldn't reach it. So I'm trying to figure out how to get it," Velaochaga said.

"So I decide to just dip my foot just enough. The ticket was floating which is the craziest part that we could just see it float. So I just dipped my foot and grabbed it with the top of my foot," Velaochaga said.

Until now Velaochaga has been anonymous. And after reading thousands of online comments he says he still feels good about his choice to get a little dirty.

"Packer fans are like 'I would do the same. You totally did what any good Packer fan would have done. You do what you gotta do.' And then you get the other side: 'That's where you belong. Get back in the sewer. Did you see Clay Matthews washing his hair down there?' Some crazy comments," Velaochaga said.

"I did not smell, by the way. It wasn't that bad. It's not like there was anything weird floating down there," Velaochaga said.

Security is seen watching the events unfold. One officer commented "In 275 we've never seen this".