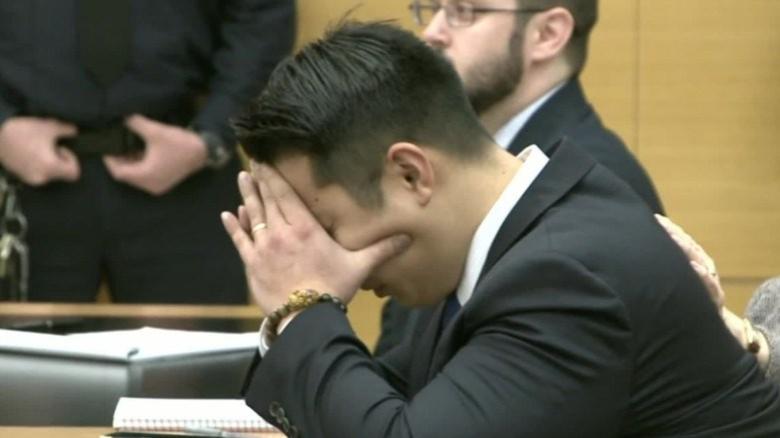 Liang was sentenced to 800 hours of community service and five years' probation Tuesday after Judge Danny Chun reduced his manslaughter conviction to criminally negligent homicide in the shooting death of Gurley, 28, who was not armed.
Liang, 28, was found guilty of manslaughter and official misconduct in February for shooting Gurley in the stairwell of a Brooklyn housing project.
But Chun said that for manslaughter to stand, the prosecution had to prove that Liang not only "created a substantial and unjustifiable risk that a death would occur" but also that the the officer "was aware of and consciously disregarded that risk."
"There is no evidence either direct or circumstantial that the defendant was aware of Akai Gurley's presence and still disregarded any risk by firing the weapon," Chun said. "The evidence showed that it was a quick reaction to perhaps a sound, which in my opinion only amounts to failing to perceive a unjustifiable risk."
The prosecution said it will appeal the judge's decision to reduce the verdict.
"My office vigorously prosecuted Peter Liang for manslaughter because the evidence established that his conduct was criminal and the rule of law demanded that he be held accountable for his actions in taking Akai Gurley's life," Brooklyn District Attorney Ken Thompson said in a statement.
"The jury, the voice of the Brooklyn community, agreed and returned the verdict of guilty against Mr. Liang, who is now a convicted felon, forfeited his career as a police officer and must now always live with the fact that he recklessly caused Mr. Gurley's death."
Liang was immediately fired after his conviction.
Thompson had written the judge with a recommendation of five years of probation, including six months of home confinement with electronic monitoring and 500 hours of community service. Liang faced up to 15 years in prison.
"Mr. Liang has no prior criminal history and poses no future threat to public safety," Thompson said in a statement last month. "Because his incarceration is not necessary to protect the public, and due to the unique circumstances of this case, a prison sentence is not warranted."
Liang, with 18 months on the job, was on patrol in the dark stairwell of a Brooklyn housing project in November 2014 when he fired his gun. The bullet ricocheted off a wall and struck Gurley in the chest. Gurley died at a hospital.
Defense lawyers called the shooting a tragedy, not a crime. Prosecutors argued that Liang was reckless and was more concerned about his story than helping Gurley.
"There is no evidence ... that he intended to kill or injure Akai Gurley," Thompson said in the statement. "When Mr. Liang went into that building that night, he did so as part of his job and to keep the people of Brooklyn and our city safe."
Liang had a brief meeting last month with Gurley's domestic partner, Kim Ballinger, at Thompson's Brooklyn offices, according to attorneys for Liang and Ballinger, who were present.
Share this article: