Eurostar looks to the future with new e320 trains 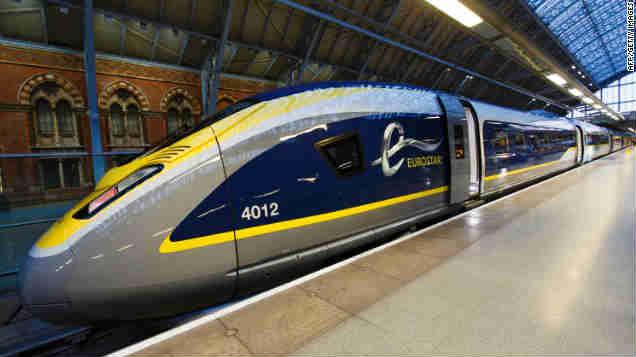 On Thursday, the company unveiled its new e320 train at London's St. Pancras Station. The new train will go into commercial service at the end of 2015. The e320 is named for its max speed -- 320 kilometers per hour (200 mph).

\"Over the last twenty years, we have led the way in cross-Channel high speed rail travel, cementing the link between the UK and mainland Europe,\" said Nicolas Petrovic, chief executive of Eurostar, in a statement to the press.

While airplane passengers increasingly have to endure shrinking legroom, the new Eurostar trains have been built to be roomy. The ergonomically-designed reclining seats are wider, and each comes with its own USB socket and touch sensitive light controls.

\"The combination of bold design, chic interiors and wi-fi connectivity will raise the bar, providing an unprecedented level of style and comfort for our customers,\" added Petrovic.

Other on-board perks include a 20% increase in capacity per train (seven trains will join the fleet next year), free wi-fi, and increased luggage areas. The design comes courtesy of Pininfarina, the Italian design studio that has worked with the likes of Ferrari and Maserati.

The new design was unveiled to coincide with Eurostar's 20-year anniversary. During that time, the company has served over 150 million customers, though Petrovic believes that's just the tip of the iceberg. Next year, Eurostar also plans to expand its network to include direct service to Provence, with stops in Lyon, Avignon and Marseille, followed by the launch of a direct route to Amsterdam in 2016.