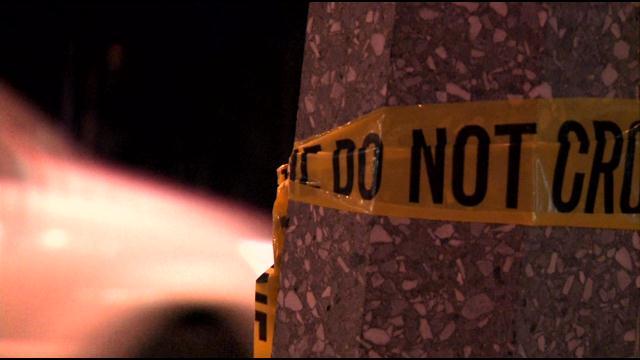 Milwaukee police are looking for two armed suspects who shot an employee inside a clothing store, and the recent crime has nearby businesses on edge.

Police say two armed suspects went inside Bouchard's clothing store shortly after the noon hour on Monday, and during the robbery shot one of the store's employees.

\"I'd saw his legs kicking a bit”, said Eddie Parr.

The store is located at the corner of North Martin Luther King Drive and Meincke.

Eddie Parr is a manager at Cricket Wireless Store which is located right next door to Bouchard's.

Parr says he didn't witness the actual robbery, but heard at least four gunshots, and saw the aftermath.

\"We were doing work, and randomly you just heard a real loud boom”, said Parr. “It sounded a like a war was going on next door. So my district manager and I looked outside. We didn't see anything going on, so went back to work. Then, five minutes later, we saw about five or ten police cars show up. That's when I walked outside, and looked inside the store, and I saw my guy lying on the floor.\"

Parr says he knows the victim quite well.

\"Everyone who works the strip is friends with each other\", said Parr.

Parr says Bouchard's is known for selling high end clothing and the store has been hit a few times.

Parr says he and his employees have to be mindful of their surroundings at work.

\"It's horrible”, said Parr. “It makes us lock up our doors a little bit earlier, and do things differently so we avoid being a victim like they did.\"

The worker who was shot is expected to recover from his injuries, and investigators are still looking for the two armed suspects who drove away in a vehicle after the robbery.

Anyone who has information on the people involved in this crime is asked to call the Milwaukee Police Department at 414-935-7260.