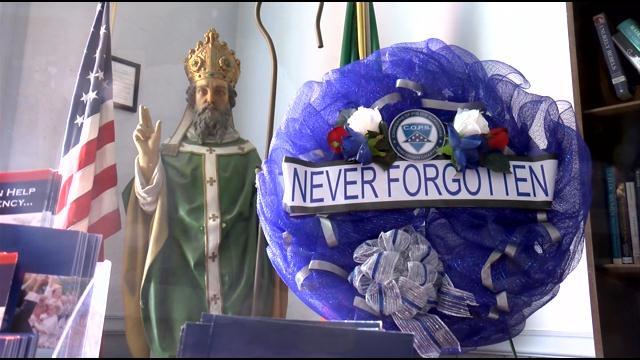 A big Irish American thank you to all who took part in the March 1st Emerald Society Fundraiser.

Among those in attendance, retired Milwaukee Police Officer Jim Higgins. He put in more than three decades of service, raised ten children and is now a proud grandfather who always makes time to show support for those who are still serving.

\"I think it's important, \" Higgins said. \"It makes Milwaukee a better place.\"

Higgins' roots go to back to Sligo, Ireland. He said he thinks police and community relations were better when he retired in the late 1980's, but he's not giving up that things will improve. His message to those in the rank and file, \"Keep doing a good job.\"

\"A few years ago we decided to start raising money for Concerns of Police Survivors and Shielded Hearts of Milwaukee,\" explained president Gary Schneider who is a police officer with the Oak Creek Police Department.

An array of Celtic performers entertained the crowd including the Glencastle Irish Dancers, Belfast born singer/songwriter Ian Gould, Blackthorn Folly, the Trinity Academy of Irish Dance and two pipes and drum bands, from the Shamrock Club of Wisconsin and the Greater Milwaukee Fire and Police Departments.

Burke's Irish Castle provided fresh corned beef sandwiches and even had to run out to get more because so many were gobbled up.

Organizer Dawn Fleming told CBS 58's Michele McCormack she was moved when one person who had readily overpaid for an item said to go ahead and keep the change, it was for charity after all.

It's that kind of support that keep these grassroots organizations going.

\"My husband was involved in something on duty and it was scary,\" shared Shielded Hearts President Teresa Robinson. \"I knew I had to meet other women who understood the police life. I was introduced to Shielded Hearts through my husband's partner's wife. I joined after that and became really involved and volunteered and made sure other women felt the support you need when you're going through something terrible.\"

Also benefiting from the fundraiser was a summer camp for children who have lost parents in the line of duty. It's run by COPS and President Denise Held leads the group in tribute to her boyfriend David Loeffller who died of an injury suffered in the line of duty.

Local police will be a part of Milwaukee's downtown St. Patrick's Parade which steps off at noon at 3rd and Wisconsin Saturday, March 14th.

You'll also see many of them at the Blue Mound St. Patrick's Parade that starts at 3 p.m. at 68th Street in Wauwatosa on the same day.

To see the personal story behind the cause click here

For more on the Emerald Society's President click here