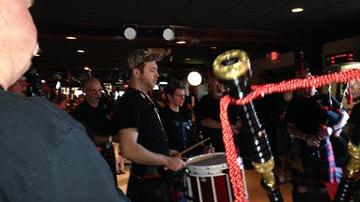 The Emerald Society in Wisconsin began back 1990 and is comprised of members of law enforcement and the criminal Justice system who are of Irish descent.

COPS is Concerns of Police Survivors and Shielded Hearts is a support group for the spouses of law enforcement officers.

Pete Fleming who is retired from the Milwaukee Police Department and his wife Dawn are long time organizers of the event.

Mr. Fleming has been selected to play St. Patrick in the annual Milwaukee Parade this year. Mrs. Fleming is a former Irish Rose who is a longtime volunteer in the Irish American community.

Julie Smith who is the 2014 Shamrock Club Irish Rose helped put together donated items for a silent auction.

President of The Emerald Society Gary Schneider told CBS 58 that while the cause is serious the day is meant to have fun.

Milwaukee Alderman Bob Donovan who has children on the Milwaukee Police Force was also on hand as was his wife Kathleen Donovan, President of the Shamrock Club of Wisconsin which organizes the annual downtown parade.

The crowd was a mix of law enforcement from across the state and several different departments. Many shared stories of their adventures in Ireland.

Wonderful live music from Black Thorn Folly and Athas got the feet tapping and the little ones got up and danced when the Greater Milwaukee Fire and Police Bagpipers performed.

If you could not attend but would like to support the causes of the Emerald Society of Wisconsin just go to their website:www.emeraldsociety.us/