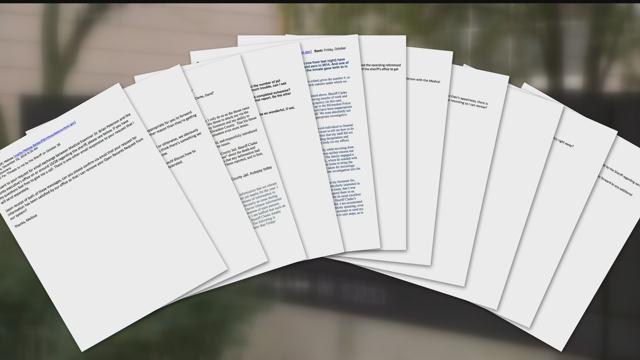 The Milwaukee County Sheriff has become somewhat of a national figure, in part because of his blunt spoken approach to law and order issues. Lately though, he's been criticized for his response or lack of a response to recent deaths in the Milwaukee County Jail.

CBS 58's April Dovorany got her hands on some emails where the Chief Medical Examiner says he was threatened by the Sheriff after releasing information on jail deaths to the media.

Back in October-we were the first TV station to report that four deaths happened inside the Milwaukee County Jail this year.

Emails show a day after our report aired the Sheriff called Chief Medical Examiner Brian Peterson, reportedly threatening to get his license revoked.

In an email sent to County Executive Chris Abele on October 29th, Peterson says he "sustained some 20 minutes of yelling and threats against my licensure for...ultimately no good reason."

He says the sheriff took issue with information released on the death of Terrill Thomas and also a tweet from October 28th advising the public of an overnight death in the jail.

Peterson also said in the email the sheriff was "furious that any information had been released on a non-disclosure case."

The County Executive's office responded to Peterson's concerns over losing his license, sending an email that reads in part "....we obviously have your back..unfortunately our office is no stranger to his bullying behavior..."

We checked with the Wisconsin state licensing board which says complaints filed are not public record so they cannot confirm or deny that one was filed by the Sheriff.