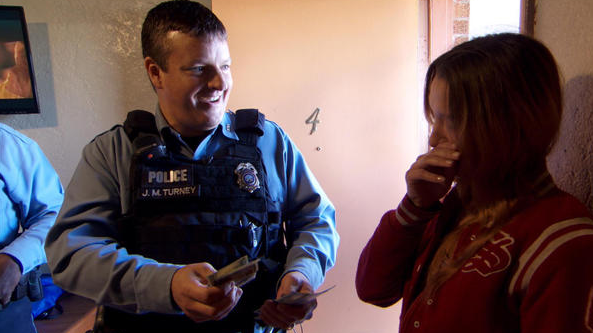 KANSAS CITY, KAN. -- This week, the Kansas City, Kansas police department was on the take.

Each officer in room got at least a grand, courtesy of the anonymous, wealthy businessman known only as Secret Santa.

“This is the day for you to just have fun. We ready to roll?” Secret Santa said.

Their assignment was to go out into the community and find people who looked like they could use an extra hundred this holiday season, people like Gwendolyn Jones.

“I told my family already that we’re not going to be able to do Christmas this year because I just don’t have the money to do it,” she said.

Didn’t have the money to do it -- until now.

“Oh my God!” one recipient said.

“This is for real!” said another.

Most of the people the officers just happened upon, but some they sought out.

Officer James Turney knew of a homeless woman staying at a motel with her two young children. In fact, Turney is paying for their room out of his own pocket.

He gave her everything.

“You make me a better person,” Turney said. “Thank you,” she replied.

“There are men and women that wear the badge and they stay on the line to protect us and to serve,” Secret Santa said.

It is no coincidence that Secret Santa chose the Kansas City, Kansas police department to give away his money this year. He’s from around here, and this relatively small department lost two officers in the line of duty just 10 weeks apart. Allowing them this privilege was meant as reminder of the inherent goodness in people.

“It’s really neat because they see that you’re a human being too, you’re just like them, and I think the uniform goes away and you just realize that we’re all the same people. And that’s the gift to me for this,” Turney said.

In the end, the officers gave out nearly $30,000 to random strangers and special causes. Those on the receiving end will, no doubt, have a merrier Christmas. While those gave it away got to keep something even better; A message for a happier new year.

“We have angels in heaven, but here you are the angels. You can touch us,” one woman said.

You can take that to the bank.

Additional photographs in the video provided by Lou Bopp.