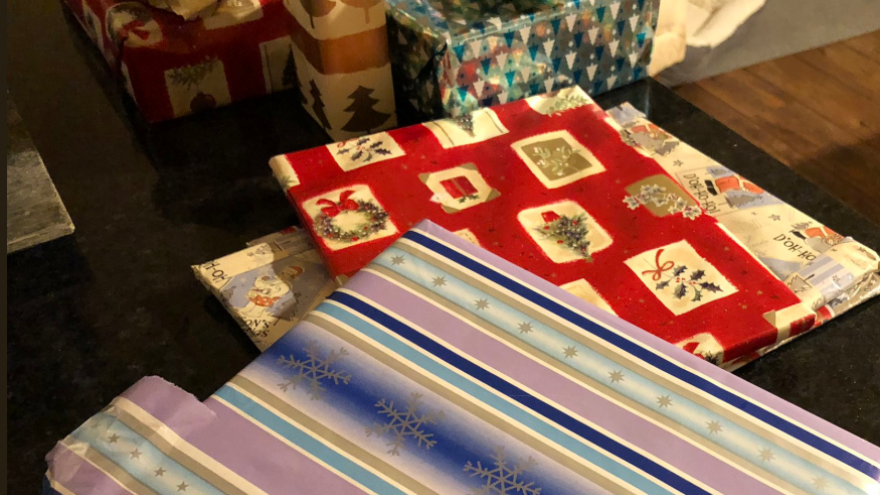 A story about Christmas gifts bought many years in advance is melting hearts across the world. Owen Williams, a dad from Wales, tweeted about his neighbor's kind gesture for his 2-year-old daughter, Cadi, on Monday.

The family's neighbor, Ken, was in his late 80s, The BBC reports. For the past two years, Ken has doted over Cadi – up until his recent death.

Then on Monday evening, Ken's daughter walked over to the Williamses' house with a surprise form her late father.

"Our elderly neighbour passed away recently. His daughter popped round a few moments ago clutching a large plastic sack," Williams explained on Twitter. "In the sack were all the Christmas presents he'd bought for *our* daughter for the next thirteen years."

Shortly after tweeting this and a few photos of the individually wrapped presents, Williams tweeted again: "I miscounted. It's fourteen gifts."

"He always told us he'd live till he was 100-years-old, so these gifts would have taken him up to our little girl's 16th Christmas," Williams wrote.

Our elderly neighbour passed away recently. His daughter popped round a few moments ago clutching a large plastic sack. In the sack were all the Christmas presents he’d bought for *our* daughter for the next thirteen years. ? pic.twitter.com/6CjiZ99Cor

Williams said he and his wife really wanted to keep all the gifts wrapped and give one "present from Ken" to Cadi each Christmas – but they weren't sure how to know what age each gift was meant for. Williams posted a Twitter poll and the people have spoken: wait and open one gift each year.

The family still couldn't resist opening just one gift early. The one they chose was a children's book, "Christmas Eve at the Mellops'" by Tomi Ungerer.

The story of Ken's Christmas gifts quickly went viral, and Williams shared more about the kind gentleman who lived next door. "Ken was a former salvage diver, seaman, carpenter, baker," Williams wrote. "The first time I met him, he was bouncing a 20ft ladder across the face of his house. He was on top. He was 83 at the time."

Ken played the accordion, but also had a daredevil streak: At age 85, he decided to take up a series of adventurous challenges, from standing on the roof of a plane to parachuting over the city of Swansea.

Williams shared an article about Ken's adventures published by a local paper. He was identified as Ken Watson and he said he was pursuing these late-in-life thrills to combat the loneliness of being a widower.

Ken was daring, but also had a soft heart, Williams said. "Our dog loved him. I mean, genuine visceral love," Williams wrote. "It was mainly due to the chocolate digestive biscuits he gave her on first meeting. She'd scream whenever she saw him." Williams said Ken always called their dog "my darling" and "sweetheart."

And of course, Ken had a soft spot for Cadi, who will now receive a special Christmas present from her neighbor every year until she is 16.

Cadi may be too young to understand now, but she will surely remember Ken's kindness for a long time. So will the thousands of people who read Williams' story about the selfless neighbor.