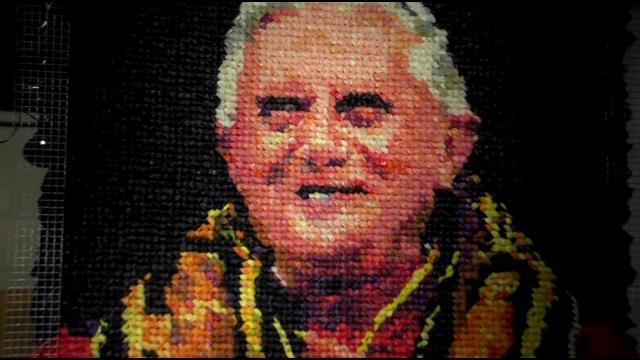 Milwaukee is now the permanent home for a controversial portrait of Pope Benedict. It's causing a stir because it's made entirely out of condoms.

\"It doesn't look like condoms. I don't know. It's nice but its just the fact that its made out of condoms and its the pope,\" said Tamara Stewart.

For it or against it, the reactions are mixed.

\"It's art, it's supposed to be provocative and not P-C,\" said Alex Doernberg.

\"I think it might be a little disrespectful to use that form of art to represent the pope,\" said Norm Frye.

But either way, this portrait of former Pope Benedict, a weaving made out of seventeen thousand condoms, is generating a lot of buzz.

\"I'd like to see it. It seems like it would take a lot of skill to arrange a bunch of condoms to look like the pope,\" said Ryan Gaucher.

Shorewood based artist Niki Johnson says she  created the portrait in 2009 after the Pope made a comment about condom use in Africa.

\"This is in no way a stance against Christianity or Catholicism. It's simply a piece that instigates conversation the role of world leaders and their responsibility to public health,\" she said.

Johnson says she's thrilled her piece will be featured here at the Milwaukee Art Museum, hopefully starting a conversation with thousands of people.

\"I really don't see education as a dangerous thing. I believe learning from the world around us is the only way we can have healthy, safe and productive lives,\" Johnson said.

Educational or not, Milwaukee Archbishop Jerome Listecki has said the piece is insulting and the Milwaukee Art Museum has dealt with backlash including losing some donors and members.

Johnson told CBS 58, though the museum has lost some, she's been told they have actually gained new donors because of the controversy.

Johnson says you can make your own decision in November, when it is officially put on display at the museum.