Ebola fighters are Time's 'Person of the Year' 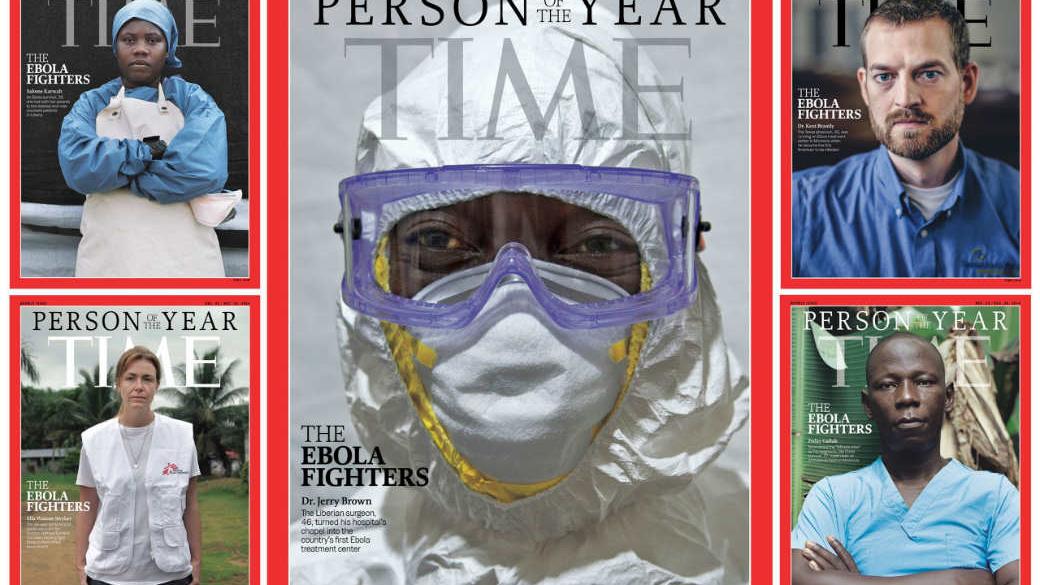 Foday Gallah saw the sick child was distressed and felt he had to do something. So he picked the kid up to comfort him.

And with that act of kindness, the 37-year-old ambulance supervisor in Monrovia, Liberia, contracted Ebola himself.

\"Of course, he got vomit all over him and that's how he got Ebola,\" said photographer Jackie Nickerson, who shot Gallah's image for Time's \"Person of the Year\" magazine cover, which honors those on the front line of the Ebola epidemic.

They're \"the ones who answered the call,\" the magazine said on its website Wednesday morning.

Nickerson expanded on why Gallah was chosen for one of the magazine's five covers: \"He's the shining example of what the right thing to do is. He's a shining example that we should all try to follow. He really did touch me with his story. I don't usually like to use the word hero, but I have to use it here.\"

According to the latest World Health Organization figures, about 6,300 people have died from the disease, mainly in West Africa. Health workers are still battling more than 11,000 confirmed cases in Guinea, Liberia and Sierra Leone, and more than 6,000 suspected and probable cases loom, according to WHO.

Though those countries mark the epicenter of the outbreak, isolated cases have spread wider, penetrating other African countries, Europe and even the United States.

Time magazine's editors decided to honor the \"unprecedented numbers\" of doctors and nurses who responded when Ebola overtook an already-weak public health infrastructure, and Time Editor Nancy Gibbs outlined how governments were ill-equipped to respond, WHO \"was in denial and snarled in red tape\" and first responders were accused of crying wolf as the disease spread.

Yet many doctors and nurses, especially those from Doctors Without Borders and Samaritan's Purse, responded and worked alongside local physicians, nurses, ambulance drivers and burial teams, Gibbs wrote. Some were driven by God, while others did it for country and some simply had \"the instinct to run into the fire, not away,\" she wrote.

\"Ebola is a war, and a warning. The global health system is nowhere close to strong enough to keep us safe from infectious disease, and 'us' means everyone, not just those in faraway places where this is one threat among many that claim lives every day,\" wrote Gibbs.

She continued, \"The rest of the world can sleep at night because a group of men and women are willing to stand and fight. For tireless acts of courage and mercy, for buying the world time to boost its defenses, for risking, for persisting, for sacrificing and saving, the Ebola fighters are Time's 2014 Person of the Year.\"

In addition to Gallah, the ambulance driver, Time highlighted on its cover four other Ebola fighters who worked on the ground in West Africa:

-- Dr. Jerry Brown is a Liberian surgeon who converted his hospital's chapel into one of the country's first treatment centers. The center's reception area, where Brown gets dressed, is a bare room, lit by a single bulb, Nickerson, the photographer, said.

-- Salome Karwah is an Ebola survivor who lost both parents to the disease and undertook the task of counseling patients in Liberia. Nickerson recalled how the Doctors Without Borders caregiver appeared to be a typical young woman, dressed nicely and a little nervous about being photographed. \"But then, she put on her scrubs. ... She became very calm, a little bit introverted,\" the photographer said.

-- Ella Watson-Stryker is a Doctors Without Borders health promoter who has been in West Africa since March. The American was uneasy during the 10 minutes it took to shoot her photo, Nickerson said. \"She was distracted, she wanted to do other things.\"

-- Dr. Kent Brantly became the first American infected while running a treatment center in Monrovia. Because he is a religious man, Time shot him at his church in Fort Worth, Texas. \"Kent was working in West Africa doing a lot of hard, selfless work to help people out,\" photographer Bryan Schutmaat said.

Pope Francis received the title in 2013.

The magazine's readers voted for Indian Prime Minister Narendra Modi to receive the title, but the Time editors' decision is based on their view of \"the person or persons who most affected the news and our lives, for good or ill, and embodied what was important about the year.\"

CNN's Jethro Mullen and Josh Levs contributed to this report.