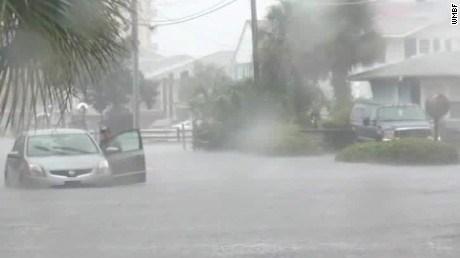 And it won't end, in many places, for several more days.

While it appears Hurricane Joaquin won't land the direct hit that some feared, communities from the Carolinas through New England nonetheless have their hands full from another storm system that's largely stalled and, in so doing, pummeled millions with rain.

"This is not just any rain," Gov. Nikki Haley of South Carolina said. "This is going to be the heaviest rain we have ever seen."

South Carolina, New Jersey, North Carolina and Virginia declared states of emergency. Coastal flood warnings were in effect from Georgia north into New Jersey, in line with the National Weather Service's forecast of "heavy rain over a large area through Sunday evening."

Crews in Brunswick County, North Carolina, spent Friday night checking on and evacuating residents from homes along the coast due to significant flooding there, the country emergency management office said in a press release.

By then, from 2 to upwards of 5 inches of rainfall had already been reported in states such as Tennessee (with 5.5 inches in Columbia), South Carolina (a high of 3.5 inches on Sullivan's Island), North Carolina (5.3 inches in Calabash) and Delaware (with over 3.5 inches along the coast).

The National Weather Service warned that some places could see as much as 12 inches of rain.

Flooding is a major concern for a number of reasons: directly from all the rains, indirectly from rivers and creeks possibly overflowing their banks, and also from storm surges fanned by strong winds (beaches off New Jersey and Delaware, for instance, had seen around 50 mph gusts by Friday.)

Compounding this is the fact that the region was already drenched.

"We've gotten into this pattern of lows in the Mid-Atlantic, which has had lots of rain the last two weeks," CNN meteorologist Rachel Aissen said. "So the ground is just saturated."

A few days ago, some forecasters thought that Hurricane Joaquin could make landfall over the weekend in Virginia or somewhere in that vicinity. The fear was that this could be another Superstorm Sandy -- an October storm that barrels up from the Caribbean with high winds, heavy rains and deadly flooding.

It doesn't look like that will happen, though it doesn't mean history won't be made.

Aissen explained that a combination of factors, including a high-pressure system behind the system, are helping push Joaquin away from the U.S. coast. At the same time, they're making the system now parked there more dangerous.

"It's creating a squeezing effect that is just ushering both moisture and high winds," said the CNN meteorologist, explaining that the winds are more a worry -- not due to the damage they can do themselves, but how they might rustle up storm surges.

In an anticipation of that wet reality, Friday night football games were moved up a day over flooding concerns in South Carolina's Lowcountry region, while others were postponed. The Yankees-Orioles game in Baltimore and the Marlins-Phillies showdown in Philadelphia were both postponed due to rain.

Farther north, New Jersey Gov. Chris Christie warned that -- hurricane or not -- there could be flooding in the southern counties of Cape May, Atlantic, Cumberland and Salem.

Said New York Gov. Andrew Cuomo: "We're not getting complacent, because weather reports change. We're making sure that everything is ready to go, just in case."

Along Virginia Beach's Atlantic Avenue, a main thoroughfare about two blocks from the ocean, business owners appeared to be taking a wait-and-see approach on Friday.

Even as far north as Waterbury, Vermont, Skip Flanders was keeping an eye out. He's seen firsthand from 2011's Hurricane Irene that the heavy rains from a huge tropical system like this can have devastating effects far from the coast.

"We had 28 inches of water in our house from Irene," Flanders told CNN affiliate WCAX. "I certainly hope that something of that proportion doesn't happen again."