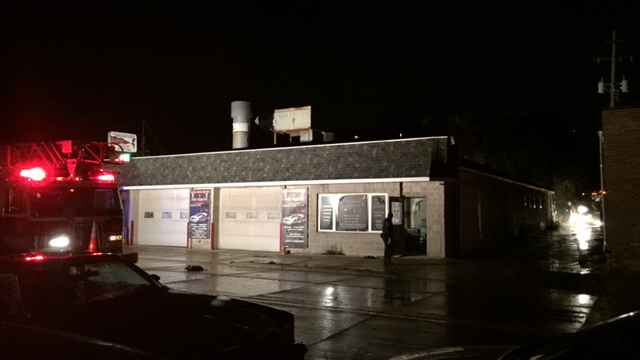 A garage and late model Cadillac SUV were destroyed by an early morning fire in South Milwaukee today.  According to the South Milwaukee Fire Department, the fire was discovered just before 1 AM in a detached garage at the rear of a residence in the 1200 block of Michigan Avenue.  When firefighters arrived, the garage was fully involved and is considered a total loss.  Also lost in the fire was the Cadillac SUV which was parked next to the garage.  According to the Fire officials, a neighboring business, an auto body shop on S 12th Avenue received some damage to the building’s roof.  The single family residence adjacent to the garage received some minor damage to its vinyl siding, as did a neighboring residence across the alley from the garage.   One person was evaluated at the scene for smoke inhalation but refused medical treatment.  While fire officials say the  house is habitable, the Red Cross was called to assist the seven people living in the home.  There is no dollar estimate of the damage and the cause of the fire is currently under investigation.