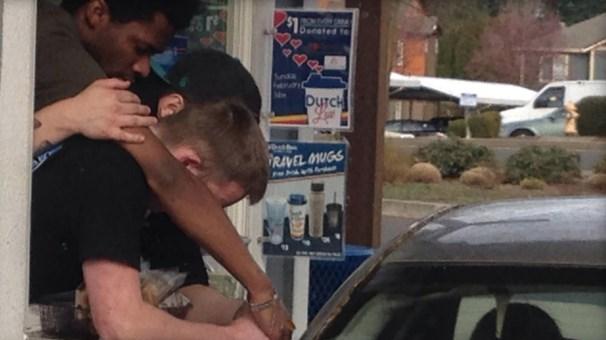 (CBSNEWS) Struggling to find the right words to comfort a friend after a tragic loss is difficult; it's even harder when it's a stranger.

But with 19-year-old Pierce Dunn, there wasn't even a hesitation.

When the Dutch Bros. Coffee shop employee heard a woman in line at the drive-thru had just lost her 37-year-old husband the day before, he knew what he wanted to do -- pray.

As the visibly upset woman pulled her car up to the coffee shop window last Friday afternoon, the teen walked over and asked, "I know this may sound weird, but I was wondering if I could pray for you."

Fellow employee Jacob Hancock, who was standing nearby, grabbed the woman's hand -- and Dunn followed suit.

As the two teens began to pray, a third man walked up behind them and held on.

"I wished her peace on the situation and peace in her life," Dunn told CBS News. "I prayed to help her family and his family through the mourning as well."

Despite being raised in a Christian household, Dunn says he has never done something quite like that before.

"That was the first time for me personally that I've prayed for someone through the window like that," he said.

It was a rare moment, and it was even more rare that it was captured on camera.

A customer behind the grieving widow's car snapped a photo of the sweet moment and shared it on Facebook, which has been shared nearly 140,000 times.

"This is normal for us," Chudek said. "We do this thing every day; we look at every person who comes through not as a transaction, but an interaction."

Evan Freeman, the third employee to participate in prayer, said the act was an "unspoken thing" they agreed on.

"The least we can do is hold her hand and make her feel better," Freeman said.

After nearly five minutes had passed, the trio let go of the woman's hand.

Freeman spoke up, "It will get better. There's always a new day; there's a new light. If you feel like you've reached rock bottom -- the only place to go from bottom is up."

With tears in her eyes, the woman seemed grateful that the baristas took the time to stop and comfort her when she needed it most.

That day, the woman drove away with a free drink, prayers and an invitation to come back if she ever needed to talk.

"By no means am I like some sort of superhero," Dunn said. "It was just an act of kindness that I think anyone can do."