Drunk driver arrested for 5th OWI after crashing on freeway 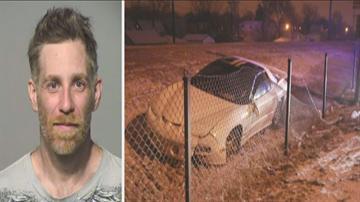 MILWAUKEE COUNTY-- A 40-year-old West Allis man was arrested for his 5th OWI after crashing on the freeway.

The man was arrested during Operation Drive Sober patrols. It's an aggressive weekend initiative to crack down on drunk drivers on the Milwaukee County freeway system.

Michael Anderson was arrested Friday shortly before 11:00 p.m. after he crashed his Pontiac Firebird on I-94 just west of Hawley Road.

Anderson's car left the freeway, went over an embankment and crashed through a chain link fence.

He told authorities that he had been drinking at Classic Lanes in Oak Creek.

If convicted of his 5th OWI, Anderson faces up to six years in prison.

Two other drivers, a Glendale woman and a Cudahy man, were also arrested during this weekend's patrols.

They were both first time drunk driving offenders.