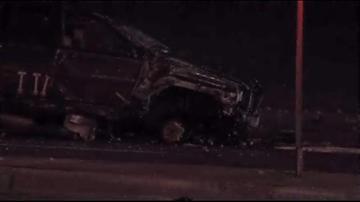 CUDAHY -- The driver of a vehicle that plowed through a Cudahy roundabout early Thursday is in jail after running from the scene of the crash.

Our crews found a damaged Jeep at the roundabout near College and Pennsylvania avenues just after the crash.

A tire from the Jeep was found on the side of the road and rocks from the roundabout were scattered all over the street.

Oak Creek police say the driver was taken into custody after fleeing the scene.

The roundabout reopened to traffic just before 5:30 a.m.