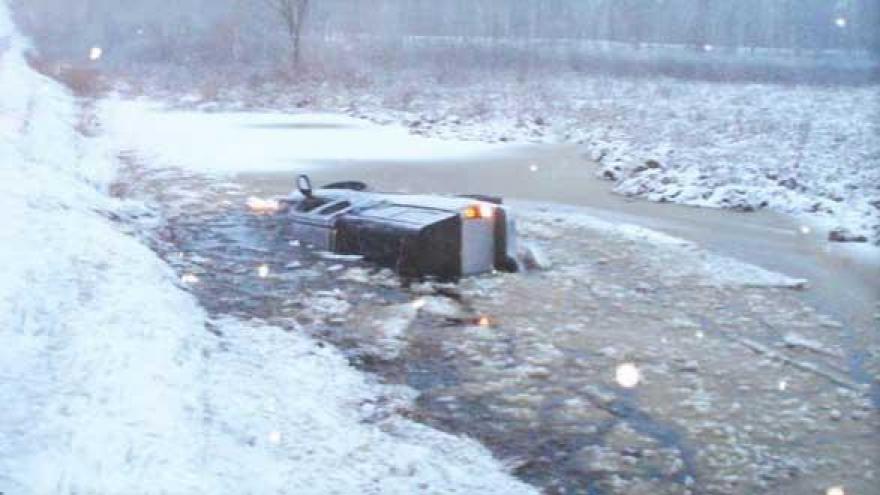 (CBS NEWS) MINNEAPOLIS -- A mother and her 5-month-old son are lucky to be alive after their truck plunged into an icy river basin in the town of Apple River, Wisconsin,reports CBS Minnesota.

They were rescued by some Good Samaritans. It happened on a county highway alongside the Apple River on Dec. 23.

Nycole Stream, 19, and her infant son, Ayidden, were in a pickup truck along with 16-year-old Krystyna Walenczak when they lost control of their vehicle on the snowy road and went into the ditch. Their truck began to sink into the river basin.

Authorities say the truck left the roadway at a steep embankment and went into the water after breaking through the ice. Two passers-by, identified as Terry and Pamela Blegen of Balsam Lake, Wis., were driving southbound on the highway when they saw the splash and found the vehicle floating upside down. Pamela Blegen called 911, and Terry entered the water to make a rescue attempt.

The vehicle settled on the driver's side, exposing the passenger window that had broken out during the crash. Two other passers-by stopped to help get the driver and 16-year-old passenger out of the vehicle. The search for the baby boy continued until they found him. The boy was initially unresponsive, but was revived.

"It could have been very bad, very tragic," Shawn Spafford of Amery, Wis., said.

Cole used a pocket knife to cut the baby's seatbelt off his car seat, which was already beneath the water.