MILWAUKEE (CBS 58) -- Dozens of protesters in Milwaukee showed up to a Common Council meeting on Tuesday, Oct. 15 to stop a proposed slaughterhouse from moving forward on the north side, and their presence was felt.

Protesters were happy to hear the issue will be referred back to the zoning committee after Milwaukee Alderman Bob Bauman said more community input is needed before the decision is made final.

The slaughterhouse would be a $60 million facility built by Strauss Brands LLC in the Century City Business Park on Milwaukee's north side. The facility would create 250-500 jobs in one of Milwaukee's poverty-ridden neighborhoods, and could receive a more than $4 million subsidy from the city.

“I was not pleased to see it sent back to committee I can tell you that, I’m looking to do everything I can to create family supporting jobs in the Central City of Milwaukee,” said Milwaukee Mayor Tom Barrett.

Tuesday, protesters and people who live nearby argued the area deserves better than a slaughterhouse. Seventh District Alderman Khalif Rainey said it's been a struggle to find companies to come into that business park and job creation is critical in the neighborhood. 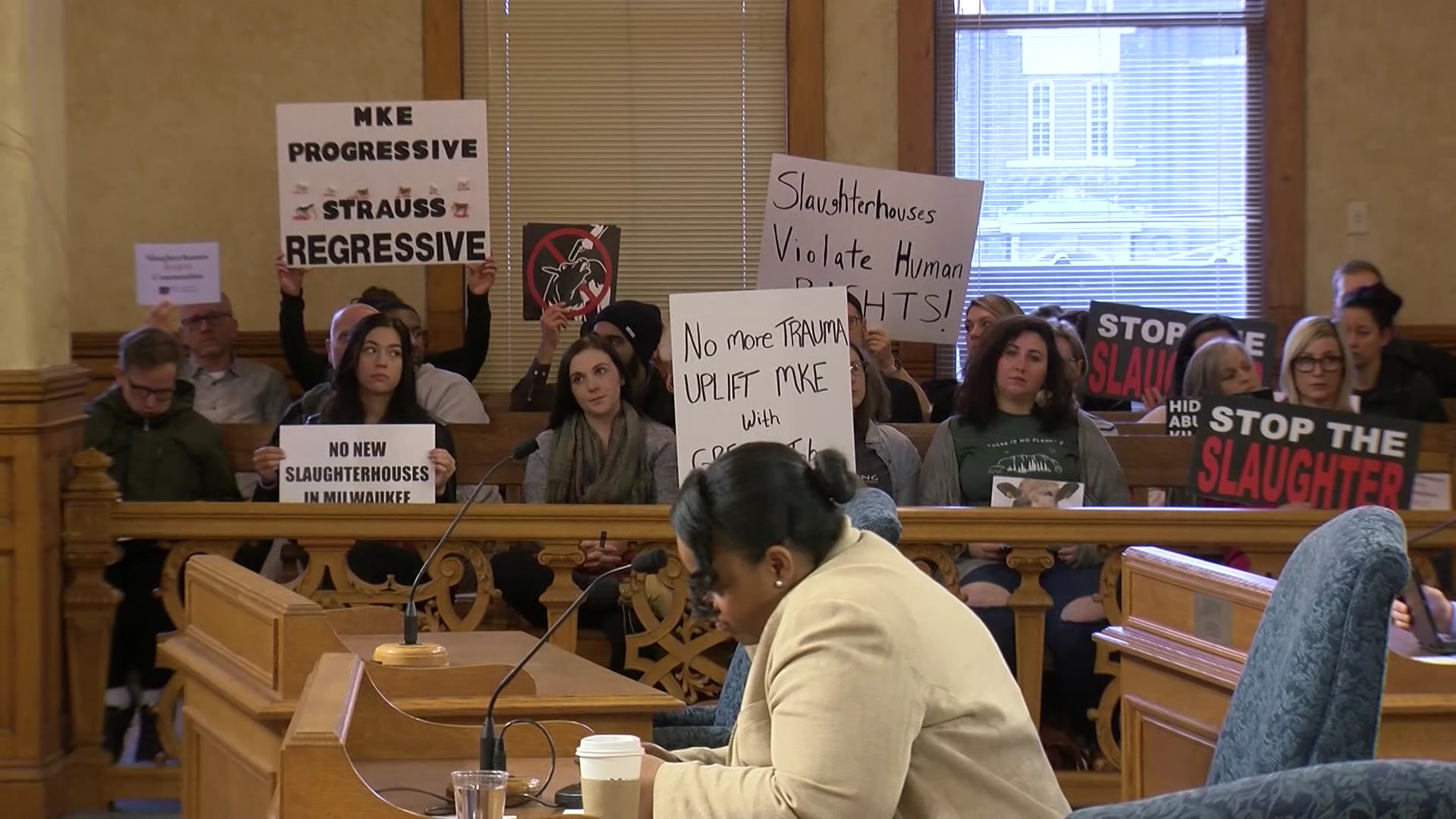 "My mom is 74, she’s been there all her life. I grew up in that area... that area deserves some better rebirth than the slaughterhouse," said Keith Terry, mother lives nearby.

"The root of this issue is poverty so what we’re talking about is job creation right? So when you say you got somebody sitting on the porch and they decision is whether do I jump into this drug gang do I jump in this opioid gang? Or do I go over here and attempt to get employment at the new factory in our neighborhood," said Alderman Rainey.

Protesters say research found slaughterhouse workers have a higher chance of developing post-traumatic stress disorder and higher crime rates could follow. They are also concerned for negative environmental and traffic impacts the slaughterhouse would bring.

”When you talk about jobs and you try to sneak this in without community input, and then you advertise that as bringing jobs-- these are the worst jobs,” said Balaji Venkatesan, protest organizer for Slaughter Free Milwaukee.

”Go to Mississippi and check out Tyson, it’s terrible and the odors start about 10 miles up or further, and this is just terrible it’s a bad spot for a neighborhood,” said Wanda Terry, who has lived near the proposed slaughterhouse site all her life.

People who grew up in the neighborhood say it’s taking advantage of an underprivileged area.

”When you use that flag of ‘this creates jobs’ you get a lot of desperate people showing up thinking they can get employed," said Keith Terry. "But if you don’t have the skill sets to be employed, you’re probably not gonna get the job.”

”I think this delay gives them that opportunity have a conversation with Strauss and get a better understanding of what’s going to occur in their neighborhood and what they could anticipate,” adds Ald. Rainey.

Now that the matter is referred back to committee, the earliest it would be brought back up is Tuesday, Oct. 29 and community input will be allowed.