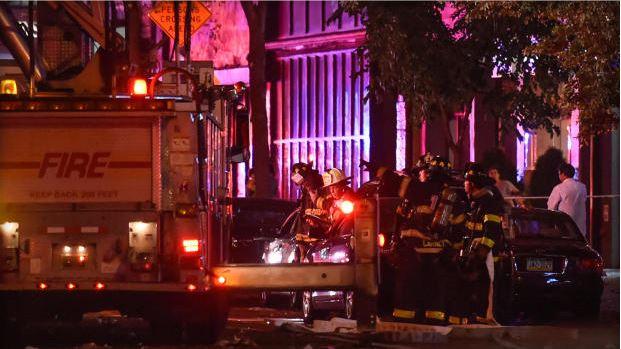 But de Blasio says "there is no evidence at this point of a terror connection" and there is no "credible and specific threat" to New York City.

The mayor says they also believe here is no specific connection to the earlier incident in New Jersey.

De Blasio says he can confirm "none of those injured are likely to die."

NYPD Commisoner James O'Neill says there have been 29 injured as a result of the explosion.

The "exact nature and cause of this explosion has not yet been determined," O'Neill says.

The NYPD Special Operations Division says a possible secondary device has been located.

An explosion in the Chelsea neighborhood of New York on Saturday night injured at least 25 people, the fire department said.

None of those 25 people has life-threatening injuries, according to a tweet from the New York Police Department's Counterterrorism Bureau.

Gas has been ruled out as the cause of the explosion, a law enforcement source said.

Officials are still trying to assess what caused explosion, the source said. No secondary device was located.

The preliminary belief of investigators is that the blast was caused by an explosive device in or near a dumpster, a law enforcement source told CNN. The source stressed this is preliminary and is not conclusive.

The explosion in New York comes after an explosion in New Jersey that authorities believe was meant to disrupt a Marine Corps charity run. Three pipe-bomb-type devices wired together were found near the boardwalk in Seaside Park. No injuries were reported and a four-block area was evacuated for most of the day, authorities said.

The area of the explosion is packed with restaurants, subway stations, shops, businesses and art galleries. People living in buildings near the affected area are not being allowed in, CNN's Bernadette Tuazon reported from the scene.

President Obama has been briefed on the explosion, according to a White House official. The President will be updated as additional information becomes available, the official told journalists.

An eyewitness told CNN affiliate NY1 he was having dinner when an explosion rocked the area.

"[I] felt a loud explosion and I felt like a lightning bolt struck the building. It, like, shook the ground," he told NY1. "Everybody ran out of the restaurant into the street. The whole city was in the street."

He says the response by police who swarmed the area was "aggressive" but "controlled."

The man told NY1 he lives in the neighborhood and knows it well.

"I walk down the street every day. ... This is my main thoroughfare. I'm either in an Uber, a cab, or on foot on this street all the time. This is my neighborhood. This isn't a tourist attraction. It's just the middle of the city. It does frighten me."

Some social media users said the sound of the explosion was heard as far away as Hoboken, New Jersey, across the Hudson River from Chelsea.

The fire department said the explosion happened at 23rd Street and 6th Avenue in Manhattan.