Dozens camp out for door buster deals at Best Buy 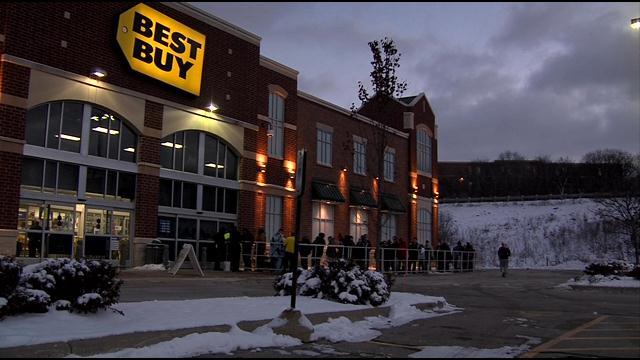 A deep discount on a 50-inch television at Best Buy had dozens of shoppers lining up early outside the store in Delafield.

Frank was the first in line, he camped outside for five days with his family.

\"This is what we do for Thanksgiving, we spend a week out here every year,\" explained Frank, \"we take a week's vacation and this is how we spend it.\"

Frank is not the only one.

\"Oh, it's great,\" said Alyssa Pietruszka, the third shopper in line, \"we're a huge family, so it's a lot of fun just to have time together.\"

Many customers walked through the doors at 5 PM with one thing in mind.

\"We have a 50-inch Panasonic for $200,\" said Bryce Vuckovich, Sales Manager at Best Buy in Delafield.

\"We're ticketing the items in advance,\" said Vuckovich, \"so there isn't a mad rush through the doors.\"

The door buster deals keep customers like Frank coming back year after year.

After five days of camping, Frank finished his shopping in less than 10-minutes.  Best Buy was just his family's first Brown Thursday stop.  They spent the rest of their evening completing their holiday shopping at a local mall.