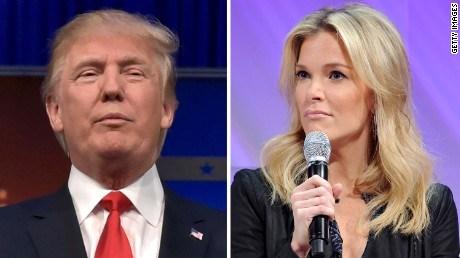 ATLANTA (CNN) -- Donald Trump's feud with Megyn Kelly escalated Friday night when he said the Fox News host had \"blood coming out of her wherever\" at this week's Republican debate, resulting in swift condemnation from conservatives and a major political event pulling its invitation to him.

During Thursday's debate, Kelly pressed Trump about misogynistic, sexist comments he made in the past, such as calling some women \"fat pigs, dogs, slobs, and disgusting animals.\"

Trump slammed Kelly, saying her questions were \"ridiculous\" and \"off-base.\"

But the comment crossed the line, RedState.com editor Erick Erickson said Friday night. He disinvited Trump from the RedState Gathering, a conservative event featuring GOP presidential hopefuls this weekend in Atlanta. Trump was scheduled to give the keynote speech Saturday night.

Saturday morning, Trump attempted to clarify the remark on Twitter.

Trump also slammed \"'politically correct' fools in our country,\" tweeting that \"we have to all get back to work and stop wasting time and energy on nonsense!\"

The real estate mogul elaborated in a statement later Saturday morning, claiming he said \"'blood coming out of her eyes and whatever,' meaning nose.\"

He added: \"Only a deviant would think anything else.\"

As for Erickson, Trump called him a \"total loser\" who \"has a history of supporting establishment losers in failed campaigns so it is an honor to be uninvited from his event.\"

When Erickson told the gathering Saturday morning that Trump would not be attending, the news was greeted with a mix of applause and boos.

\"Folks, I've given Donald Trump a lot of latitude because he's not a professional politician. He's been a very blunt talker. I've said some dumb things in my life, then I've apologized for them,\" said Erickson, adding that the Trump campaign declined to apologize or clarify the remark when he reached out to them Friday night.

\"Friend Donald has to learn this is public life,\" Murdoch tweeted.

Saturday morning, Penny Young Nance, the CEO and president of the conservative group Concerned Women for America, told CNN that Trump's \"tantrum was even more enlightening then his original remarks she questioned.\"

\"Does he have a problem with women?\" Nance asked in a statement. \"Three wives would suggest that yes, maybe there's a problem. The good news is that Kelly is a mother of toddlers and knows how to deal with petulance and tantrums. Every presidential election since 1964 has been carried by women. Women don't like mean and we certainly won't vote for men or women we don't trust. Trump's biggest woman problem is how does he convince women to trust him to keep America safe?\"

\"Megyn Kelly was a colleague of mine for six and a half years when I was at Fox. She is one of the most remarkable people I know. Intellectually unsurpassed as a broadcast journalist, she has great integrity, and so you know I'm going to stand for Megyn Kelly,\" Huckabee said.

He added: \"I would certainly never say anything about a person like that, and I hope he apologizes because I think that he should.\"

Former Hewlett-Packard Carly Fiorina, the only woman running for the GOP nomination, was quick to slam Trump's comment Friday night.

\"With all due respect to @megynkelly the outrage at Trump's divisive language is long overdue,\" he added on Twitter.

And South Carolina Sen. Lindsey Graham said in a statement that Trump's statements \"are not worthy of the office he is seeking.\"

\"As a party, we are better to risk losing without Donald Trump than trying to win with him,\" Graham said. \"Enough already with Mr. Trump.\"

Gathering will go on

Erickson said in a statement Friday that while he likes Trump personally, \"I just don't want someone on stage who gets a hostile question from a lady and his first inclination is to imply it was hormonal. It just was wrong.\"

But the Trump campaign fired back, saying \"this is just another example of weakness through being politically correct.\"

\"For all of the people who were looking forward to Mr. Trump coming, we will miss you,\" his campaign said. \"Blame Erick Erickson, your weak and pathetic leader. We'll now be doing another campaign stop at another location.\"

But Trump campaign spokeswoman Hope Hicks told CNN Saturday morning that Trump will not hold an event Saturday night. His next public appearance will be in Michigan on Tuesday.

As for the newly vacant spot at the RedState Gathering, Erickson has invited Kelly to replace Trump.