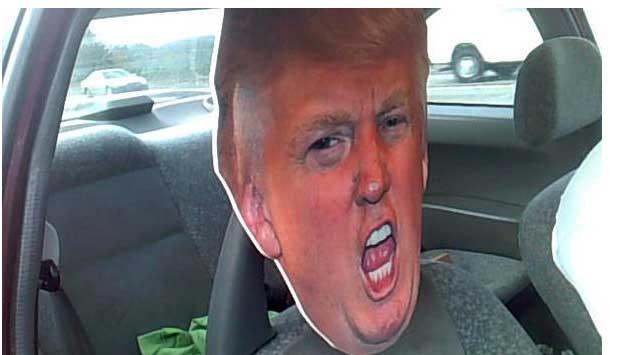 (CBS NEWS) SEATTLE -- A cardboard cutout of a head in a passenger seat definitely caught the attention of a Washington State Patrol trooper Tuesday morning.

That’s because it wasn’t just any old cardboard head, but that of Republican presidential nominee Donald Trump.

A trooper stopped the motorist who was driving with the cardboard likeness in a carpool lane south of Seattle on Highway 167. The stunt netted the driver a $136 ticket.

Another trooper tweeted a photo of the cardboard Trump head affixed to the passenger seat headrest.

Washington State Patrol spokesman Rick Johnson says every now and then they get somebody trying to be funny and says they’ve seen everything from teddy bears to mannequins all sitting beside drivers.

But Trump’s head? That was, to borrow a catchphrase -- huge.