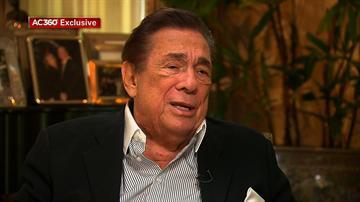 (CNN) -- Los Angeles Clippers co-owner Donald Sterling made it clear Friday that he wasn't going away, suing the NBA for more than $1 billion for its decision to ban him for life and force him to sell the franchise.

The lawsuit -- which was provided to CNN by Sterling's lawyer and wasn't unexpected -- marks the latest twist in a case that began last month when TMZ posted a recording in which Sterling made racist comments. It also comes amid fresh questions about the 80-year-old's mental state, raising the issue of how much control he has or should have with the Clipppers.

Sterling's inflammatory remarks to his companion, V. Stiviano, spawned outrage among NBA fans, players and executives. Chief among the latter was NBA Commissioner Adam Silver, who banned Sterling from the league, fined him $2.5 million and pushed through a charge to terminate all of his ownership rights in the franchise.

Sterling's camp, in its lawsuit, claims that the move to terminate his ownership \"is unconstitutional, in breach of contract, in restraint of trade, in breach of fiduciary duties and ... is malicious and oppressive.\"

Among other allegations, Sterling says in the lawsuit that he never violated the NBA's constitution and that the recording that spawned this scandal -- and that recording, it says, is the sole base of the NBA charges against him -- is against California law.

The lawsuit also states that \"the forced sale of the Los Angeles Clippers threatens not only to produce a lower price than a non-forced sale, but more importantly, it injures competition and forces antitrust injury by making the ... market unresponsive to ... the operation of the free market.\"

\"(Sterling believes) that the NBA's forced sale ... would create damages of at least $1 billion, which includes capital gains taxes, unnecessary and increased investment-banking fees, legal and transactional costs, and the loss of all future appreciation in the Los Angeles Clippers franchise value,\" it adds.

The filing in a federal court in California comes a day after Sterling's estranged wife, Shelly, agreed to sell the Clippers to former Microsoft CEO Steve Ballmer for $2 billion.

It also comes days before the NBA Board of Governors had been set for a vote that could have forced the Sterlings to give up that team.

The NBA said Friday that the June 3 meeting has been canceled -- something Sterling himself had asked for in his lawsuit -- due to the Clippers' pending sale to Ballmer.

\"I hope obviously this thing goes through, the sooner this thing is resolved, the better for everybody, the league, the Sterlings, certainly for the team and for the staff, to have some certainty around who's going to own the team going forward and sort of pick up on the momentum that the team has built towards the end of the season. I think it's a big plus,\" Parsons said.

In an interview with CNN's Jason Carroll on Friday, Clippers guard J.J. Redick said he feels that the new ownership will cement a team on its way up.

\"We're on the verge of doing something great,\" Redick said. He added that \"as a professional athlete, you always have distractions,\" but \"you never want to be part of a national scandal.\"

Redick also said that a quick resolution is what he hopes for.

\"As a player and as a franchise, you want finality,\" Redick said.

However, Friday's lawsuit seems to indicate that a quick resolution may not happen.

\"The NBA, Shelly Sterling and the Sterling Family Trust today resolved their dispute over the ownership of the Los Angeles Clippers,\" the NBA said in a statement. \"Mrs. Sterling and the Trust also agreed not to sue the NBA and to indemnify the NBA against lawsuits from others, including from Donald Sterling.\"

That fact speaks to yet another aspect of this story that's up in the air: Who controls the Sterling family trust, which is the official owner of the Clippers?

The question of whether Donald Sterling has standing over the NBA franchise doesn't just have to do with his racist comments but, more generally, his mental state.

Two neurologists have deemed Donald Sterling to be mentally incapacitated, two sources with detailed knowledge of the situation told CNN on Friday.

Sterling's lawyer, Maxwell Blecher, firmly shot down this report, calling such a declaration a \"vast overstatement.\" Blecher said the 80-year-old was diagnosed with a \"modest mental impairment\" or a \"slowing down.\"

\"(Sterling is) far from incapacitated,\" his lawyer said.

According to one of the sources, there is a provision in the Sterling family trust that says if either Donald Sterling or his mso-border-alt:none windowtext 0in;padding:0in\">estranged wife, Shelly Sterling, become mentally incapacitated, then the other becomes the sole trustee.

That could smooth the way for the deal that Shelly Sterling negotiated with Ballmer.

So, too, could something Sterling acknowledged in his lawsuit Friday: that another of his lawyers wrote a letter to the NBA on May 20 stating that \"Mr. Sterling agrees to the sale of his interest in the Los Angeles Clippers.\"

\"This letter confirms that Donald T. Sterling authorizes Rochelle Sterling to negotiate with the National Basketball Association regarding all issues in connection with a sale of the Los Angeles Clippers team,\" lawyer Doug Walton wrote.

Where does Sterling stand, then, on whether the team should be sold?

His lawsuit makes clear that he believes the NBA has no right to force such a sale, just as the league was wrong in banning him for life and fining him. In addition to damages, the lawsuit seeks a restraining order.

It also acknowledges the $2 billion agreement that his estranged wife reached with Ballmer.

Asked about such a sale on Friday, before the Board of Governors meeting was canceled, Blecher said that Donald Sterling \"is looking at the whole situation and evaluating where to go from here.\"

\"He doesn't want to fight with Shelly. That's the bottom line,\" Blecher said.

Whatever happens with Sterling's lawsuit, there's no question that, if the sale goes through, it would mean a huge windfall for him and his family.

The real estate investor bought the Clippers for about $12 million in 1981.

Three-quarters of the NBA Board of Governors would have to OK any deal with Ballmer. If they do at the agreed-upon price, it would be the largest sum paid for an NBA franchise by far.

Last month, the Milwaukee Bucks, a team with a losing record in a small television market, sold for $550 million.

In a statement earlier Friday, Shelly Sterling confirmed the deal with Ballmer and how it would revamp the team's ownership.

\"We have worked for 33 years to build the Clippers into a premiere NBA franchise,\" she said in a statement. \"I am confident that Steve will take the team to new levels of success.\"

The Sterling's would-be successor as owner, Ballmer, is worth $20 billion, mso-border-alt:none windowtext 0in;padding:0in\">according to Forbes magazine.

Ballmer was recently involved in an unsuccessful effort to buy the Sacramento Kings and move them to Seattle, near where Microsoft is based. But in a statement Friday, he indicated that the Clippers would stay in Southern California.

\"I love basketball. And I intend to do everything in my power to ensure that the Clippers continue to win -- and win big -- in Los Angeles,\" Ballmer said Friday.